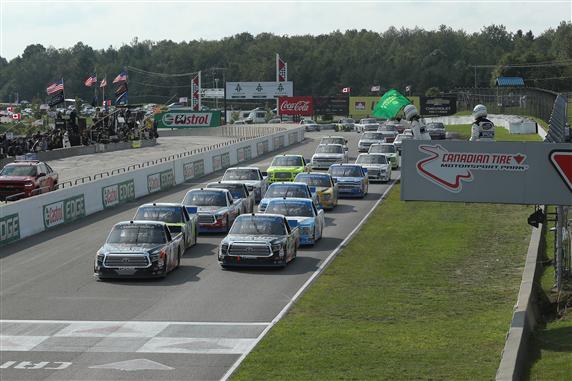 Truck Series Update As We Head To Canada

The NASCAR Gander Outdoor Truck Series will make its second stop in the Playoffs at Canadian Tire Motorsports Park this weekend. When it’s all said and done, there will be a new winner at the track as all previous winners are not entered. This opens the door for another Playoff contender to punch their ticket to the next round.

Last weekend in Bristol, Brett Moffitt who was able to get the job done. With the win, Moffitt is on to the Round of 6. Unlike his 7 competitors, Moffitt has been sleeping stress-free all week long. For both Canada and Las Vegas, Moffitt is racing care-free. The defending Truck Series champion is looking to uphold that title and is already off to a good start.

In all six Truck Series races at Canadian Tire Motorsports Park, there have been different winners. The inaugural race went to current NASCAR Cup star Chase Elliott. Fellow Cup Series drivers Ryan Blaney and Erik Jones were each next in line to claim a Canadian victory. In 2016 it was John Hunter Nemechek who battled Cole Custer through the grass across the line to score the win. In 2017 Austin Cindirc used his fresh tires to slice through the field, leading 32 of the 64 laps from the pole when it was all said and done. And finally just last year it was Justin Haley who split the spinning teammates of Noah Gragson and Todd Gilliland as they came out of the final turn.

No matter the competitors, it is sure to be another action-packed race today. Soon we will know who will add their name to the tracks NASCAR history. One thing is for sure however, it will be a new driver.

Off Week For Cup Puts Focus On Road Course Racing In Xfinity, Truck Series
Dale Earnhardt, Jr. Confirms He Will Drive At Darlington
%d bloggers like this: