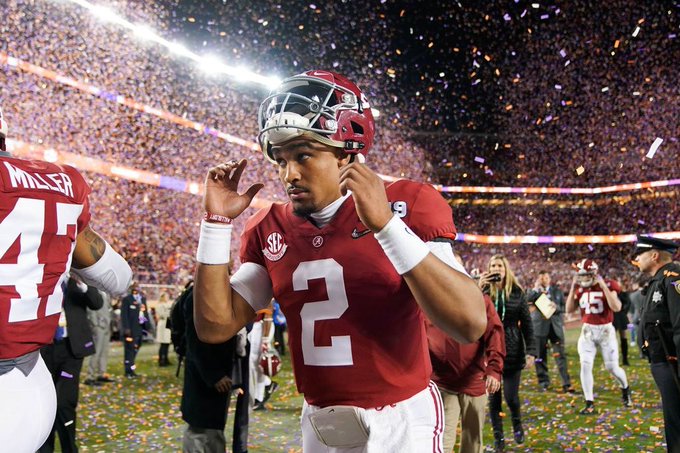 As the College Football world prepares for it’s first big Saturday this weekend, I thought it would be helpful to squire the landscape and get you up to date on the results of some key quarterback battles (see what I do for all of you?).

Shocker special! Just kidding. Apparently it was news that senior Jalen Hurts got named the starter for the Sooners. He was supposedly in a battle with redshirt freshman Tanner Mordecai and freshman Spencer Rattler, but I don’t even think Coach Riley believed it himself. Hurts will finally have his chance to start again after losing his job to all-world talent Tua Tagovailoa at Alabama. Oklahoma fans have to be thrilled with the run on quarterbacks they’ve had after Heisman winners Baker Mayfield and Kyler Murray. Now to get a talent like Hurts in what was supposed to be a transition year? They’ll take it. Here’s hoping that Hurts can shed the gun-shy mentality he carried at ‘Bama and help keep Oklahoma in contention to be playing come January. The Sooners host the Houston Cougars Sunday, September 1st.

The Buckeyes have named sophomore Justin Fields the starter for the fall campaign. He was the expected winner as soon as Tate Martell and Matthew Baldwin bounced in the off-season, but struggled to beat out Kentucky transfer Gunnar Hoak for most of the spring. Ohio State fans have to be a bit uneasy about Fields heading into 2019 based off how much he struggled to separate from the far less talented competition. Though the top shelf recruit’s physical traits easily made him the logical choice and I can’t wait to see how he fares. They host the Florida Atlantic Owls this Saturday, August 31st.

The Tigers will have their first true freshman starter at quarterback in Gus Malzahn’s 14-year run at the school. 247Sports’ Brandon Marcello reports that freshman Bo Nix beat out redshirt freshman Joey Gatewood for the spot. Nix, a five-star recruit, was one of the crown jewels of the past recruiting class and he looks like the real deal with his uncanny ability to just make creative plays on a consistent basis. Auburn fans sure hope so. After last season’s strong 8-5 finish, they’ll be looking to make a massive run at the top spot in the SEC in 2019. The Tigers meet the Oregon Ducks under the bright lights of the Dallas Cowboys’ AT&T Stadium on August 31st.

Mack Brown has selected freshman Sam Howell to be the starter. This has been the popular pick since Coach Brown alluded to this in a press-conference last week. The 6-foot-1, 225 pounder beat out redshirt freshmen Jace Ruder and Cade Fortin. Fortin has since entered the NCAA Transfer Portal in wake of the news. The Tar Heels meet the South Carolina Gamecocks August 31st.

Wake Forest Head Coach Dave Clawson has named redshirt junior Jamie Newman the starting quarterback for the opener. Newman beat out the guy he replaced last year, sophomore Sam Hartman. This was a pretty tight battle all the way through, as Hartman showed a ton of promise last season. Though Newman will walk into 2019 with the opportunity to build off his late season run in 2018, tallying a 3 to 1 TD/INT ratio in the 4 games he played in extensively. The Demon Deacons host the Utah State Aggies Friday, August 30th.