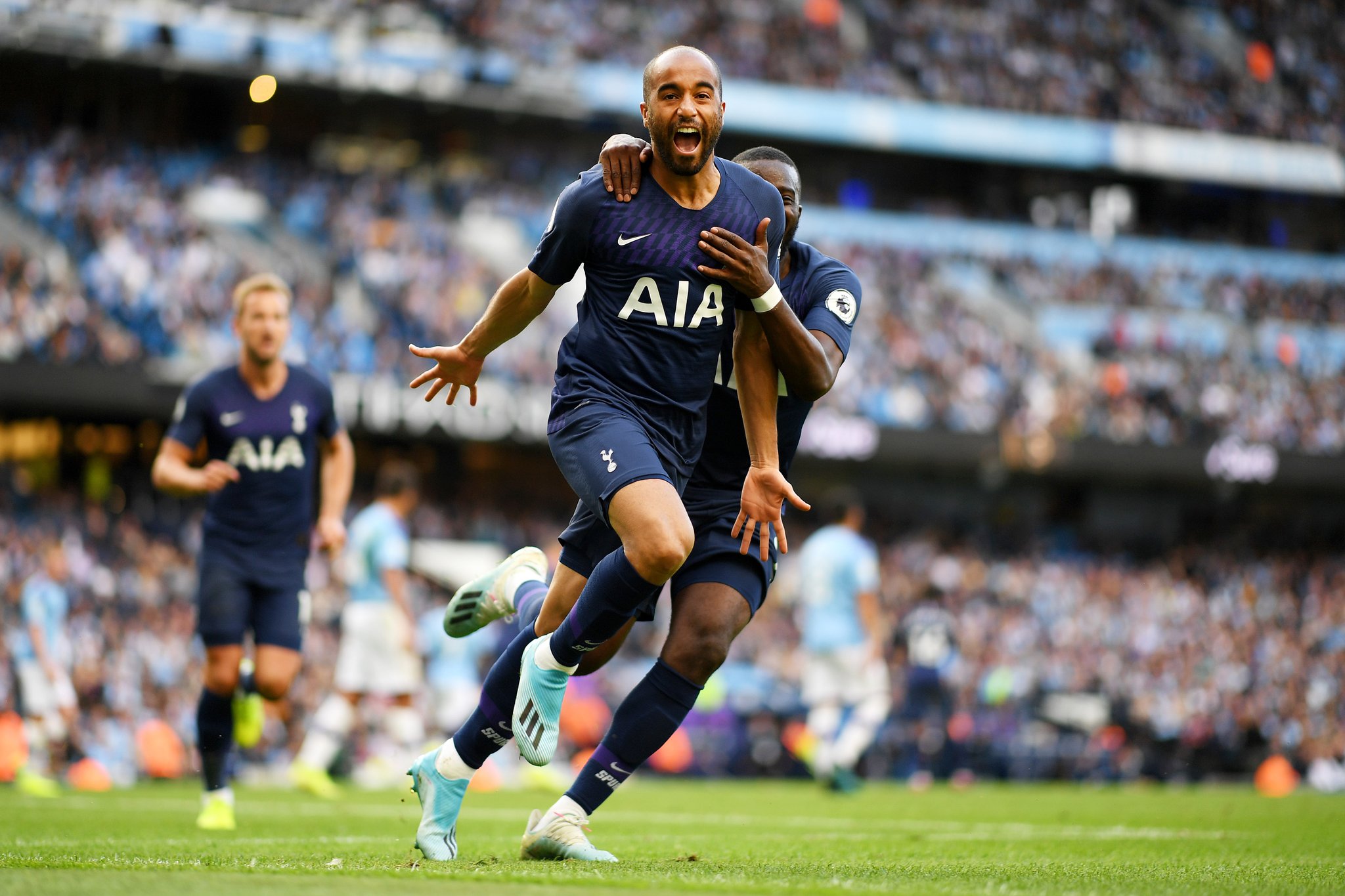 Manchester City has to settle for a point after being denied by VAR versus Tottenham once again.

A header from Lucas Moura helped Tottenham secure a point against Manchester City at the Etihad.

City took the lead after 19 minutes through Raheem Sterling. However, Spurs were level four minutes later through a strike from Erik Lamela.

Pep Guardiola’s side restored their lead just past the half hour as Sergio Aguero tapped home a Kevin De Bruyne cross.

Tottenham only had three attempts on goal throughout the game but scored from two of them. They were level once again ten minutes into the second half through a header from Lucas Moura.

The Brazilian, who was brought on as a substitute, was only on the pitch for 19 seconds before he scored with his first touch.

City thought they had won it in injury time. A corner from Kevin De Bruyne was flicked on by Aymeric Laporte. The ball fell to Gabriel Jesus who curled the ball into the net.

However, just like the Champions League quarter-final in April, Manchester City had a goal ruled out due to VAR against Spurs.

Laporte had handballed in the lead up to the goal from Gabriel Jesus.

City had to settle for a point, despite dominating the game and having an incredible 30 attempts on goal to just three from Tottenham.

Manchester City started brightly. On seven minutes, Kyle Walker drove forward down the right-hand side. He squared the ball to Raheem Sterling in the box. However, the Englishman’s shot was well blocked by Spurs defender Kyle Walker-Peters.

City were dominating possession in the early stages, with Tottenham struggling to get out of their own half.

Manchester City took the lead after 19 minutes. A great cross into the box from Kevin De Bruyne picked out Raheem Sterling at the back post, he guided his header into the far corner of the net past Hugo Lloris in the Spurs goal.

Spurs were struggling to get Harry Kane into the game who had only touched the ball four times in the first 23 minutes.

However, against the run of play, Tottenham were level midway through the first half.

Tanguy Ndombele passed the ball to Erik Lamela who strode forward and guided a shot from 20-yards-out into the net. The shot wasn’t in the corner of the goal and Manchester City keeper Ederson should have done better.

Tottenham were level for just 11 minutes, as Manchester City took the lead once more.

Kevin De Bruyne cut the ball back to Sergio Aguero inside the penalty area. The Argentine got in front off Spurs defender Toby Alderweireld and flicked the ball into the net to restore City’s lead.

Three minutes before half time, City almost added to their lead. Great play once more from De Bruyne who passed the ball across the penalty box. It found IIkay Gundogan who’s shot went just wide when he should have hit the target.

Manchester City started the second half like they did the first, on the front foot.

Oleksandr Zinchenko hit a shot from 25-yards, which was well saved by Hugo Lloris in the Spurs goal.

Minutes later, Bernardo Silva had a great chance to extend City’s lead but his shot from inside the box was straight at Lloris who made a comfortable save.

Tottenham were struggling to cope with Manchester City’s wave after wave of attacks and were fortunate that they weren’t further behind at the start of the second half.

However, somehow Tottenham were level once again after 55 minutes.

A corner from Erik Lamela was headed into the net by Lucas Moura, who had just came on and scored with his first touch. The Brazilian was only on the pitch for 19 seconds before he scored.

Manchester City were still looking the more threatening of the two sides but were unable to provide that final finish to get themselves back in front.

On 78 minutes, City had a great chance to take the lead. A cross by Zinchenko found Gabriel Jesus but his header went just wide.

Manchester City thought they had won it in injury time. A corner from Kevin De Bruyne was flicked on by Aymeric Laporte. The ball fell to Gabriel Jesus who curled the ball into the net.

However, Manchester City were to be denied by VAR once more. The goal was ruled out after Laporte had handballed in the lead up to the goal from Gabriel Jesus.

City had to settle for a point, which brought their run of consecutive Premier League victories to an end.

For, Spurs this was a great point and despite being outplayed, they showed great resilience to come away with a point.

Next up for Manchester City they face Bournemouth away on Saturday. Meanwhile, Tottenham are at home to Newcastle also on Sunday.