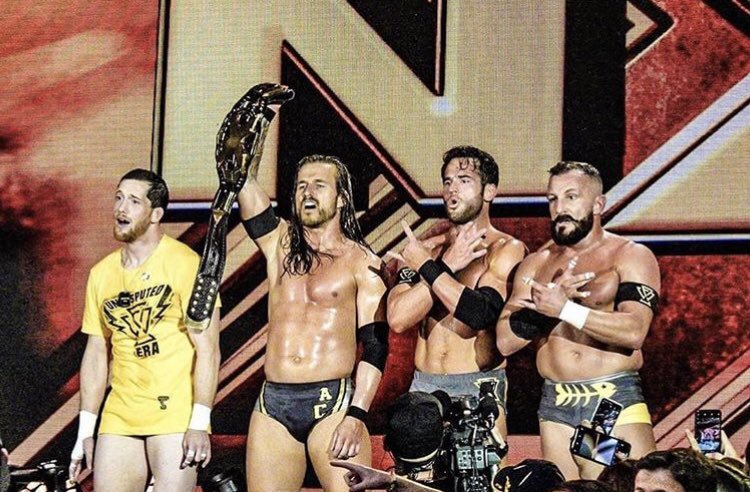 The Undisputed Era: Kyle O’Reilly, Bobby Fish, Roderick Strong, and Adam Cole; a foursome of extreme talent and prestige that dazzle fans night after night for the NXT brand. These four captivate fans with their impressive moves; their attitudes, and their bravado.

Originally debuting as a trio at the end of NXT Takeover: Brooklyn III; Cole, Fish, and O’Reilly would spend the next few months running roughshod through the NXT roster. Their first major success coming off the heels of an impressive performance at NXT Takeover: WarGames, defeating the teams of sAnitY and the Authors of Pain, who partnered with Roderick Strong.

Gold would soon be realized by the UE, as Fish and O’Reilly would get an NXT Tag Team title victory against the champs sAnitY in November of 2017. It would be 2018 when things would get interesting, however…

Another Championship and a New Member

NXT Takeover: New Orleans would be the stage in which the Undisputed Era would truly “shock the system”. It started with Adam Cole becoming the first-ever NXT North American Champion, winning it in an intense ladder match. But, Cole would have to pull double duty that night, as Bobby Fish was out with a knee injury. He would defend the NXT Tag Team titles with O’Reilly in a three-way tag match against the AOP and the team of Roderick Strong and WWE UK Champion Pete Dunne.

Coming towards the end of the match, as Dunne looked to put away Cole and O’Reilly, Strong would turn on his partner, ensuring that the UE would retain. He would then stun everyone in the building by ripping the UE arm cuff from Cole’s arm and putting on himself. After months and months of prying, trying to recruit Strong into the group, the wool was pulled from everyone’s eyes; Roderick Strong was the fourth member of the Undisputed Era.

The group, now a foursome, would terrorize the NXT roster, dominating in both singles and tag team competition. The team of O’Reilly and Strong would lose the tag titles to Mustache Mountain, only to regain them two days later. Cole would lose the NXT North American Championship to Ricochet, but his golden drive kept him in the hunt for months on end.

When one door closes, another one opens…

NXT Takeover: Phoenix was the night that things changed for the Era, as O’Reilly and Strong would lose the tag titles to the War Raiders. It would be months until things started to come together. NXT Takeover XXV would see Fish and O’Reilly be unsuccessful in regaining the NXT Tag Championships. Adam Cole would be the saving grace of the stable.

In the midst of a red-hot feud with NXT Champion Johnny Gargano, Adam Cole would pull the upset victory; claiming the NXT Championship after a hard-fought battle. The stable would celebrate post-match to an almost rabid crowd.

The Undisputed Era and their rise to prominence run parallel to another memorable foursome in professional wrestling. Of course, I speak of the 4-Horsemen: Tully Blanchard, Arn Anderson, Ole Anderson, and Ric Flair. Now, for obvious reasons, I chose to include Ole because he was part of the original four. Sure, I could have added Barry Windham, Lex Luger, or Sting, but; I think the original lineup is much more fitting for this.

Bobby Fish is the Ole Anderson of the group, in the way that his straightforward approach, not just in promos, but in the ring, speaks for itself. The man is a machine when he’s healthy, he will take apart a body part, and will very much tell it like it is. Intensity personified for the group.

Meanwhile, Kyle O’Reilly is the Arn Anderson of the group, also one who will single out a body part and work it over; O’Reilly also has his moments where his personality can go from serious to comical. And, yes, while Anderson wasn’t always known for comedy, he did have his moments of humor.

Roderick Strong is clearly the Tully Blanchard of the Undisputed Era; having a smugness about him that takes him from likable to wanting to hit him in the face. But, he is also someone who can talk the talk and walk the walk. The Master of the Backbreaker has the Moxy to get in his opponent’s face; as well as get dirty in the ring.

Adam Cole is the Undisputed Era’s “Nature Boy” Ric Flair. Isn’t it obvious? Cole is the true leader of the group, being both the biggest braggart and hardest worker in the Era. With razor-sharp wit and undeniable resolve, Cole is the one member of the group who keeps the others in check. Not that they need to be kept in check, but, he is the glue that keeps the crew together.

On top of that, he is only the second person (behind Johnny Gargano) to be called an NXT Triple-Crown Champion. With a group as talented as the Undisputed Era, he is clearly the one to sit atop the mountain. And tonight, as Cole looks to retain against the former champ Gargano, O’Reilly and Fish look to become 3-time NXT Tag Team Champions. Strong looks to win his first singles gold, as he goes for the NXT North American Championship against the champ Velveteen Dream and Pete Dunne.

As if you weren’t already reading them?

Well, I’m of the belief that when those call-ups for the Era happen, they need to go up together. If for no other reason than that of the need for a new supergroup. Sure, The OC is great, and there’s The Lucha House Party, which is a thing, I guess. And there was the group that was supposed to be a thing, EC3, Cesaro, and Bobby Roode. They were going to be called… The Main Event Muscle Men?

Anyhoo, bringing the Era up as a complete foursome would pump new life into the main roster. For them, I’d see them becoming a runaway success on the blue brand. On Raw, they would likely become mid-card fodder, which tends to be the thing to do to successful NXT projects on that show.

But, on SmackDown, they would likely have the kind of run that Evolution had on Raw; being the be-all, end-all of talent for the brand. Having them on SmackDown Live would also bring better attention to their individual talents, as well; showcasing them not only as an almost unstoppable unit but, a force to be reckoned with individually.

But what are your thoughts?