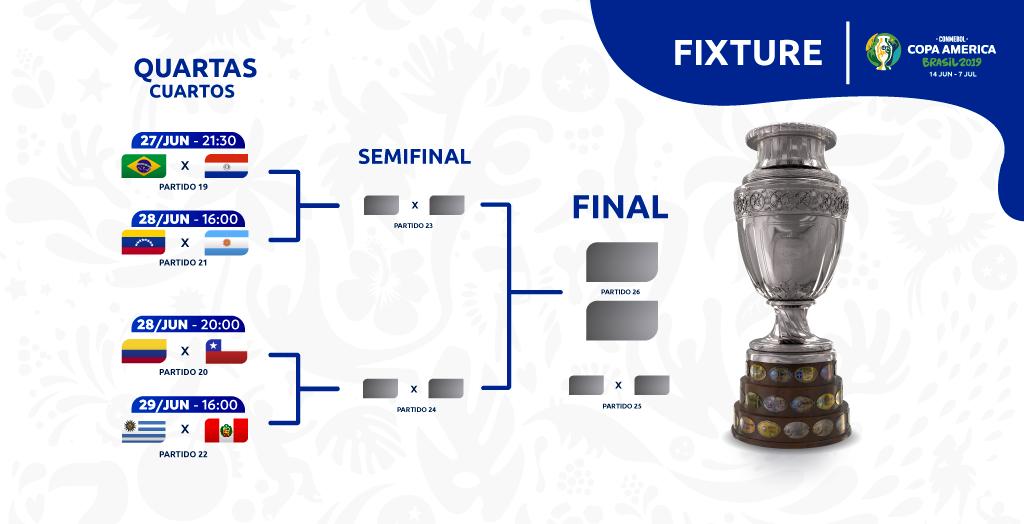 The quarterfinals of Copa America 2019 kick off Thursday night as hosts Brazil welcome Paraguay in Arena do Grêmio.

The following day gifts us a double header with Venezuela taking on an under-performing Argentina while current holders Chile face Colombia later in the evening.

Finally, Saturday afternoon sees Óscar Tabárez’s experienced Uruguayan team up against Peru. Here is a closer look at each match up ahead of the action.

The Seleção are undefeated out of the group stage and heavy favorites to lift the trophy on home soil. Although the Brazilians lack star player Neymar, they lead the tournament scoring with eight goals.

On the other hand, Los Guaraníes barely advanced to the knockout rounds. Despite placing third in Group B with no wins, Eduardo Berizzo’s men move on narrowly beating Japan on goal difference to the last spot in the quarters.

Of course most expect a comfortable win for Tite’s men; effectually setting up a potential mouth watering semifinal with Argentina. However, Newcastle star Miguel Almirón and team will hope to spring a huge surprise.

Venezuela are arguably the only surprise of the tournament so far. Rafael Dudamel’s team impressively held Brazil to a goalless draw and are also undefeated.

Meanwhile, the star studded Albiceleste led by Leo Messi continue to disappoint in international competition with one win, a draw and a loss being enough to progress. Regardless, the 2016 finalists may wake up at any moment.

The match will be in the historic Maracanã stadium with kick off at 3:00pm ET. Some predict La Vinotinto to finish off fourteen-time champions Argentina. However, the safer bet is that Messi and team overcome their difficulties.

Coached by by the experienced Carlos Queiroz, Colombia are the only side in the quarters boasting a 100% record. After dispatching of Argentina 2-0, Los Cafeteros shut out Qatar and Paraguay as well.

Similarly, their opponents enjoyed a brilliant start by dispatching of Japan 4-0 and edging past a 10 man Ecuador. However, defeat to Uruguay for the reigning champions means La Roja progressed as runners up in Group C.

Not only is this exciting tie the most difficult tie to predict, it’s eventual winner will likely go on to face Uruguay, another excitingly unpredictable scenario. Led by James Rodriguez, this in form Colombia is capable of any task.

The team of experienced veterans that make up Uruguay have led many to declare them favorites next to Brazil. Indeed, only the hosts have a better goal difference than La Celeste coming into the knockout rounds.

Meanwhile, Peru is the highest conceding team left in the competition and will need to make defensive adjustments before Saturday afternoon. La Blanquirroja will continue to rely on their own veteran Jefferson Farfan in attack.

Like Brazil – Paraguay, most will consider this match done and dusted. Tabárez’s experienced core of Diego Godin, Edinson Cavani, Martin Caceres and Luis Suarez should be the end of the road for the spirited Peruvians.