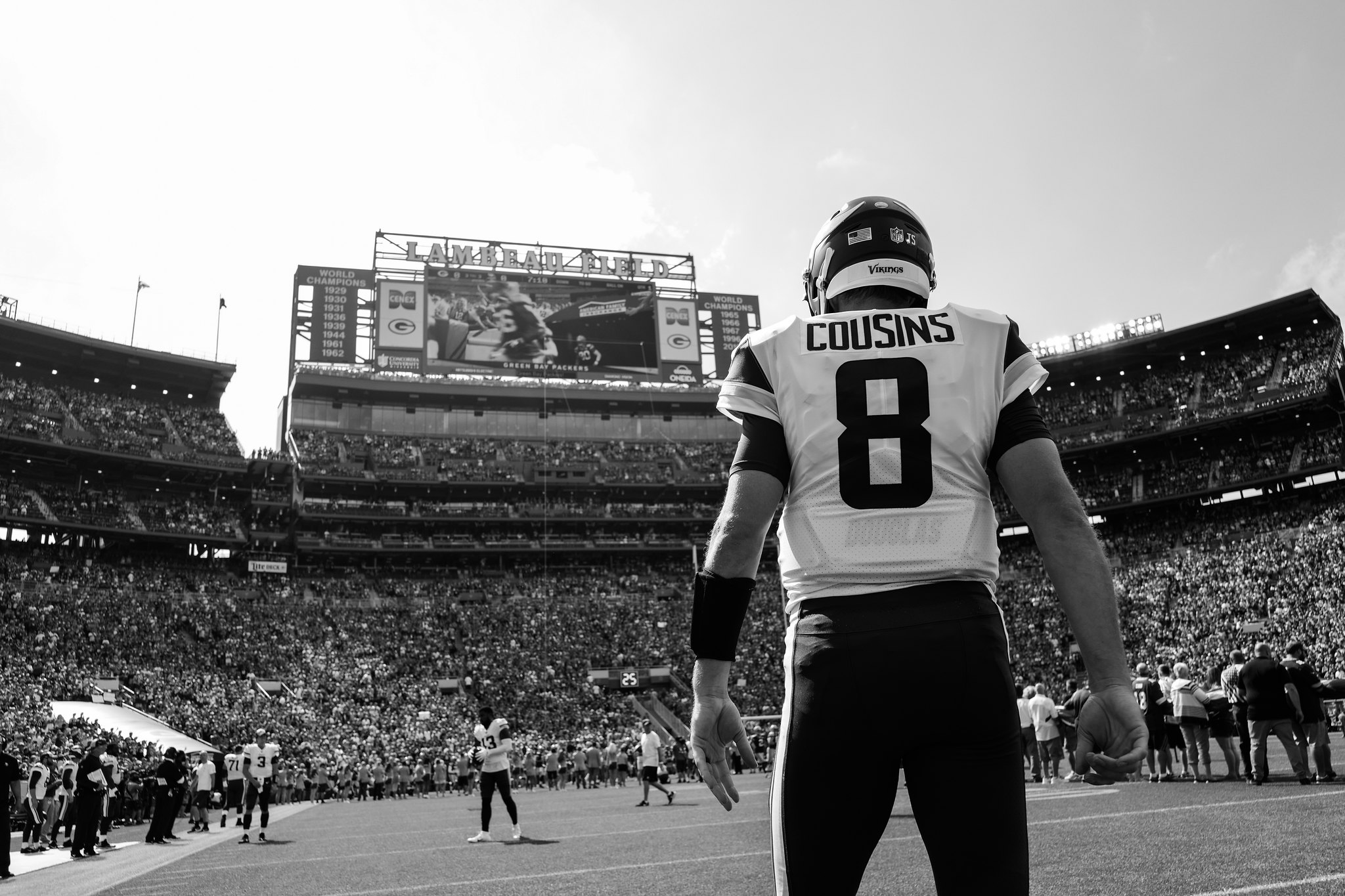 The State of the Minnesota Vikings Franchise

Let’s take a step back and put ourselves in the shoes of the Minnesota Vikings fans approaching the 2018 NFL season. After suffering a heartbreaking defeat to the Philadelphia Eagles in the 2017 NFC Championship, expectations approaching 2018 were high. Among the offseason moves for the Vikings was upgrading the quarterback position. This was a gutsy move, as quarterback Case Keenum’s 2017 season saw him reach career highs in completion percentage, touchdowns, passer rating, and yards per attempt.

Additionally, Keenum won 11 of the 14 games he started. His performance throughout the season guaranteed him a payday during free agency. However, the Minnesota Vikings decided that it wouldn’t come from them. After reaching the NFC Championship, Minnesota decided to cut ties with Case Keenum. This left a new void to be filled going into the 2018 season. Enter quarterback Kirk Cousins.

Kirk Cousins officially entered free agency on March 6th of 2018, after the Washington Redskins refused to franchise tag the quarterback for the third year in a row. Instead, the team traded for then Kansas City Chiefs quarterback Alex Smith, signaling the end of the Kirk Cousins era in Washington.

Cousins was a highly pursued free agent, even drawing a $90 million offer from the New York Jets. However, Cousins opted to sign with the Minnesota Vikings for an equally impressive, fully guaranteed three-year, $84 million deal. The deal cemented Cousins as the starter for the duration of the contract.

Approaching the 2018 NFL season, there were obviously high expectations for Kirk Cousins and the Minnesota Vikings offense. The offense boasted wide receiver’s Adam Thielen and Stefon Diggs, two of the NFC North’s best. The offense also included running back Dalvin Cook, who had tons of buzz behind him approaching the season.

Quarterback Kirk Cousins handled the pressure of a large contract surprisingly well. The quarterback tossed 30 touchdowns (with only ten interceptions) in 2018. He accumulated 4,298 yards on the season, his fourth consecutive year with over four thousand yards passing.

However, the quarterback was heavily criticized for his 2018 season. The truth is, Cousins isn’t who should be criticized, rather the lack of pieces around him. Specifically, two things stymied the consistency of the offensive unit.

Dalvin Cook and the “Injury Bug”

Dalvin Cook struggled heavily in the 2018 NFL Season. One of the reasons for his struggles was a weak interior offensive line (more on this later). However, another equally debilitating issue that plagued the running back was nagging injuries. Cook missed five games in 2018 due to a lingering hamstring injury.

The severity of the injury became apparent entering the Week 4 matchup against the Los Angeles Rams. Cook was tagged as questionable (hamstring) after missing the Week 3 contest against the Buffalo Bills. The running back opted to play in the Week 4 matchup, although he was likely unhealthy for the game. The result was an abysmal performance in which he averaged two yards a carry in the contest. Cook only fell victim to a tougher outing when he faced the Chicago Bears in Week 10.

Following the Rams matchup, Cook missed the next four games as the hamstring injury continued to hinder the tailback week after week. As a result, running back Latavius Murray took over the backfield for the Minnesota Vikings. While serviceable, the impact just wasn’t comparable to what was expected out of Dalvin Cook. This led to the Vikings fielding the 30th best rushing attack in 2018.

The Offensive Line Was Dreadful

Few NFL teams have been stymied by the offensive line position as the Minnesota Vikings have. As mentioned previously, the Vikings rushing offense ranked 30th in the league. This was a product of not only the health concerns of running back Dalvin Cook but also a fragile offensive line.

Notably, the Vikings didn’t have a single offensive lineman with a top-80 grade from Pro Football Focus for their efforts throughout the 2018 NFL Season. The lack of star power on the offensive line explains why they couldn’t open holes for Dalvin Cook and fellow running back Latavius Murray. When looking at Power Success, a metric that measures how well teams fare in short-yardage situations, the Vikings rank deplorably at 30th.

As an entire offensive line, the Minnesota Vikings were serviceable in the passing game. However, starters Tom Compton, Pat Elflein, and Mike Remmers struggled heavily in 2018. The three linemen combined to give up 18 sacks on the season. The result was a unit that left much to be desired in 2018.

Can the Minnesota Vikings Offense Return to Form?

The 2018 Minnesota Vikings, unfortunately, will be seen as a team that failed to live up to its huge expectations. However, the 2019 season brings optimism for the offense. The team returns top wideouts, Adam Thielen and Stefon Diggs. They also boast tight end Kyle Rudolph, who the team signed to a lucrative deal.

The team also did a great job of building the offense through the NFL Draft and free agency. The Vikings drafted Alabama Crimson Tide tight end Irv Smith Jr. in the second round. The offensive line was also completely restructured as the team parted ways with struggling offensive linemen Tom Compton and Mike Remmers.

With the departure of Latavius Murray and a healthy Dalvin Cook plus the addition of third-round pick Alexander Mattison in the backfield, that caps of the complete restructuring of the Minnesota Vikings offense. Quarterback Kirk Cousins now has all the tools he needs to succeed in 2019. Cousins possesses the tools to be a sneaky Pro Bowl selection heading into the 2019 season, with a team that surrounds Cousins with the most talent he’s had in his seven-year NFL career.

Why JuJu Smith-Schuster is the Steelers’ Key Player
Why The Denver Broncos Are Contenders In 2019
%d bloggers like this: