Can Kevin Harvick End His 2019 Winless Streak at Pocono? 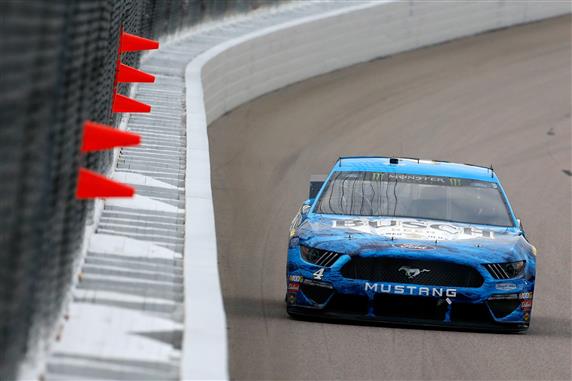 Can Kevin Harvick End a Career-Long Winless Streak with First Victory of Season at Pocono?

Although he has been close to victory many times, Kevin Harvick is still winless in his career at Pocono Raceway. The California native has been in position to tame the tricky triangle in recent years though. The 4 team has 8 top 10s in the last 9 Pocono races. Harvick is not only looking for his first Pocono win, he is looking for his first checkered flag of 2019 as well. Despite having 5 wins at this point a year ago, ‘Happy’ Harvick has been absent from victory lane this year. Is Pocono the week where Stewart-Haas scores their first win of the year? History for Harvick and his teammates at Pocono should leave them feeling optimistic for Sunday.

In 36 career starts at Pocono Raceway, Kevin Harvick is still searching for that elusive first victory. However, he does have 12 top 5s, 17 top 10s, 187 laps led at the 2.5 mile raceway. He also has an active streak of 6-straight top 10s, including 2 runner up finishes. Since joining SHR, Harvick has only finished 2 of 10 Pocono races outside of the top 10. The Tricky Triangle is one of Harvick’s most consistent tracks. SHR cars overall run strong at Pocono, with their Yates-powered Fords being superior on the long straightaways. While Harvick trumps his 3 teammates in experience, he will likely need to race against them Sunday for the win.

Harvick’s winless streak at Pocono was shared by another superstar driver until recently-Kyle Busch. ‘Rowdy’ scored his first career Pocono win back in July of 2017. Busch also went on to win again in July of last year. The Las Vegas native has 2 of the last 3 Pocono wins coming into this weekend. If Harvick wants to finally win at Pocono, he will need to also battle against Busch for the victory.

So can Harvick finally end his career winless drought at Pocono this weekend? He will have stiff competition in the Toyotas of Busch and Truex, but he enters the weekend as one of the favorites. Sporting News lists Harvick at 9-2 odds for the victory, falling short of only Kyle Busch. Expect the 4 Busch Lite Mustang to be a contender up front all weekend long. If strategy by crew chief Rodney Childers works out, we could see Harvick’s 2019 winless streak come to an end.