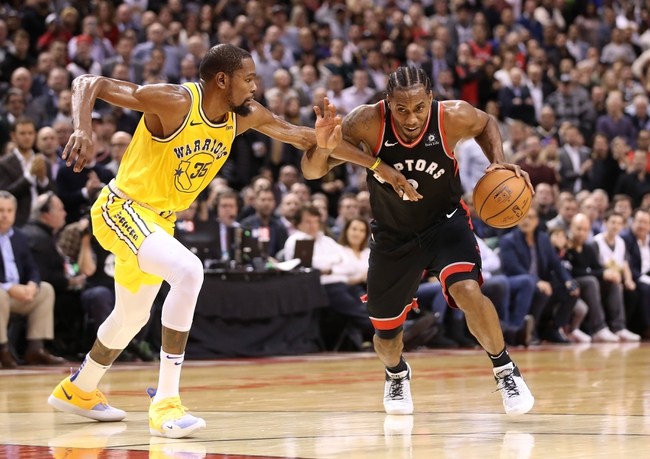 The battle for the NBA championship will feature one team that is on a quest for a historic three-peat. With another team who represents the hopes of an entire country. The Golden State Warriors are in their fifth straight NBA finals and hope to do what no team has done in over 20 years. Toronto is here for the first time in franchise history, and hold the hopes for a Canadian championship team on their shoulders. Both teams have relied on their respective stars to get them to this point.

For the Raptors Kawhi Leonard has led his team with clutch offense and smothering defense. He may be the best two-way player in the NBA this season. On the other side, the Warriors have relied on their star power to help get themselves to this point.  The combination of Steph Curry, Kevin Durant, Klay Thompson, and Draymond Green all have championship pedigree. The Warriors will not be at full strength as Durant and DeMarcus Cousins will be recovering from injuries. Here is a breakdown of what each team will have to do to become the next NBA champion.

The 2019 #NBAFinals Presented by @YouTubeTV are set!

The Warriors are coming off of a sweep of the Portland Trailblazers in the previous round. They seemed to have figured out how to adjust to playing without Durant. The role players stepped up to pick up the slack and Curry has returned to his MVP form. Golden State has been here before, and have the advantage in terms of experience. They also are well rested after being off ten days since the last time they played. This combination will be tough to overcome for Toronto.

Playing without two original starters will be a factor for the Warriors, especially with Durant’s performance in these playoffs. Without him, Green has become the key that drives the Warrior engine with his defense, rebounding, and play-making abilities. If he continues his play and the splash brothers continue their hot shooting, the Warriors will cement their legacy in NBA history. Coach Steve Kerr will have to figure out how to incorporate Durant and Cousins back into the fold if they return. If they can manage these factors and the role players continue to step-up then the Warriors will be the next NBA champion.

The Raptors have relied heavily on their superstar Leonard, who has been one of the most dominating players in this years playoffs. He is averaging 31 points, 9 rebounds, and 4 assist as well as playing lock down defense. The Raptors have stepped up their team defense as well, especially versus the Milwaukee Bucks. They held them to 42% shooting from the field, including 31% from 3-point range. Toronto used a match-up zone to frustrate MVP candidate Giannis Antetokounmpo and were the first team to slow down the Bucks attack. They must rely on their defense if they hope to have a chance versus the Warriors.

Leonard will not be able to defeat Golden State on his own, so the rest of the Raptors must step up to the plate. Pascal Siakam has been their second leading scorer, but has been inconsistent since the opening round. Kyle Lowry may have overcome his playoff woes, but has to take his game to another level in order to stop the Warriors potent offense. He needs to become a reliable third option for the Raptors and continue his performance from the last series where he averaged almost 20 points. The Raptors bench stepped up last series as well. Norman Powell and Fred VanVleet became reliable weapons especially from 3-point range. They must continue their production of the bench if they hope to have a chance to upset the defending champions.

Golden State has too many weapons, especially if Durant returns to form. Their combination of experience and overall talent will be too much for Toronto to overcome. The only positive factor in the Raptors favor is they do own home court advantage in this series. That will not be enough to stop the Warriors and they will win the series in five games. Curry will get the NBA Finals MVP that he has missed out on and the Warriors will go down in history as one of the best NBA dynasties.

Beal Misses Out On All-NBA Teams And A Big Payday
Siakam Leads Raptors Past Warriors In Game One
%d bloggers like this: