Bill Goldberg vs. The Undertaker Set for Super Showdown 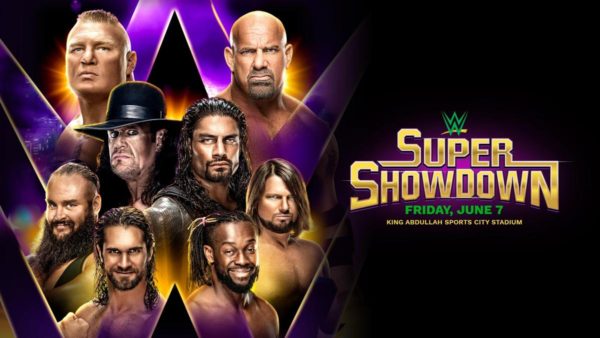 Bill Goldberg vs. The Undertaker Set for Super Showdown

WWE is gearing up for the next big show to take place in Saudi Arabia; WWE Super Showdown, and have already announced one of their marquee matches. Scheduled is the first-time meeting between the two biggest names of the Monday Night Wars; where we will see former Universal Champion, Bill Goldberg vs The Undertaker.

Goldberg was last seen in a WWE ring at WrestleMania 33, where he lost the Universal Title to Brock Lesnar; after a year-long feud. (Although, it was really a three-event feud that was stretched over the course of a year. Moving on…)

The Undertaker was last seen in a WWE ring at the last Super Showdown event in Australia. He was involved in a tag team feud which saw him teaming with Kane; against the likes of the reformed Degeneration X (Triple H and Shawn Michaels).

WWE teased a potential match-up between the pair back during the Royal Rumble in 2017; in which they had a staredown in the middle of the ring. Undertaker would eliminate Goldberg shortly after, but not before getting Speared.

Why we couldn’t see Bill Goldberg vs. The Undertaker…

This is a match that many fans of the Monday Night Wars would dream up, but could never witness due to both being in rival companies. The Undertaker was one of the premier faces of WWE, while Goldberg was one of the faces responsible for the driving success of WCW’s run in the mid to late 90s.

Once Goldberg actually was signed to WWE, however, there was hope. Unfortunately, it wouldn’t happen the first time around, as he was a Raw Superstar, and Undertaker was on SmackDown. After leaving the company in 2004, it would be 12 years before he set foot in a WWE ring as a competitor. By then, The Undertaker was on a here-and-there basis with the company.

However, that all changed at the 2017 Royal Rumble event, where the two would come face to face for the very first time. Their staredown would be interrupted by several other stars in the match, which they would easily dispel before Goldberg speared Taker by surprise.

Goldberg’s stay would be short-lived, however, as Undertaker would eliminate Goldberg from the Rumble. The exchange left fans salivating at the idea of a future match between the two legends.  Bill Goldberg vs The Undertaker. A match that they would have to wait two years to see.

Goldberg took little time to respond to the news of the match, tweeting…

Being that this is their first meeting, you can expect that both will be looking for the power advantage early on in the contest.

Fans in Jeddah, Saudi Arabia will not only witness the first-time meeting between these two legends; but, they will also see a 50-man, over the top rope battle royale. Touted as “the largest in WWE history.” They will also see Triple H face off against Randy Orton.

The event is set to take place on June 7th.