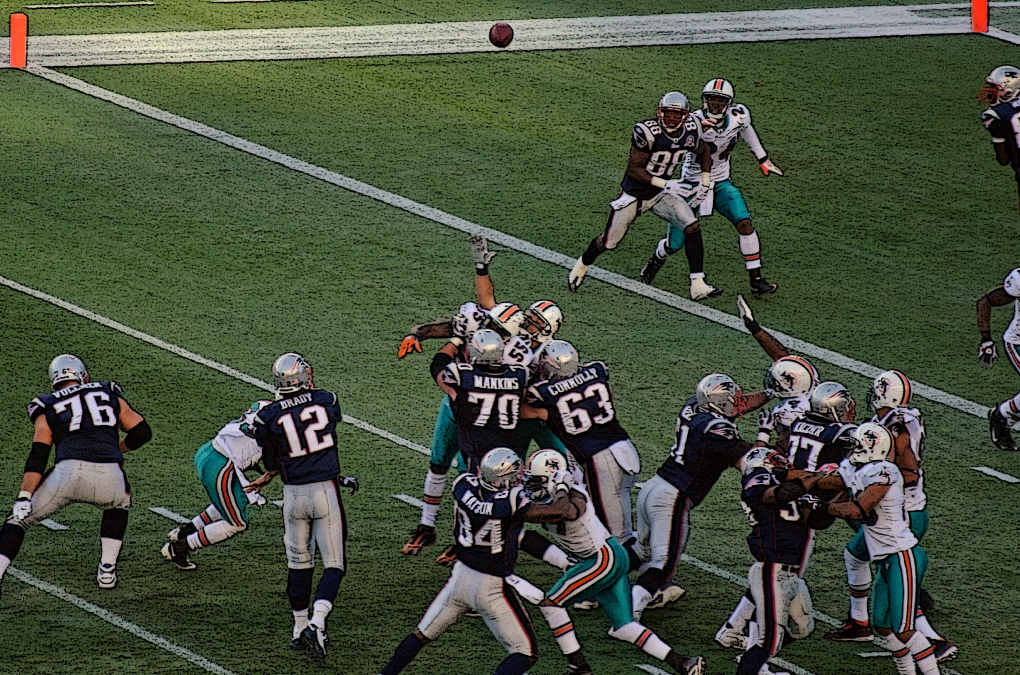 Football 101: Tackling the Game – The Two-Point Conversion, Explained: What it is, When it Started, Why Teams Use it, and Where it’s Going

In 1883, a touchdown was worth just four points. The kick afterward was worth another four. In 1897, point values were reassessed making a touchdown worth five points and the succeeding field goal one point. It wasn’t until 1912 that six points were assigned to the touchdown.

The automated extra-point kick brought the new American pastime into a monotonous lull. The immediately following moments after a touchdown, the point of highest excitement, allowed for bathroom breaks and channel changes. This sequence transformed when teams could opt for a chance at two points rather than one known as the two-point conversion.

The two-point conversion happens by way of a normal scrimmage play, rather than a field goal, starting at the opponent’s two-yard line. The offense has one attempt to score which would, in turn, give them two extra points, in addition, to the six they scored from the touchdown. In total, the offense would score eight points from the drive.

If the two-point conversion attempt ends in a dead ball, neither team receives any points, and the kickoff follows; the previously defending team returning. If the defense can recover the ball by way of interception or fumble, they can return it for a two-point conversion.

It is illegal for an offense to set up in field goal formation and then attempt a two-point conversion (a trick play).

Starting in 1958, college football approved the first scoring change in 46 years. The idea behind the rule change was to limit the number of tie games; for contests that went into a third overtime, two-point conversions were mandatory. It also helped continue the excitement and momentum of a touchdown after the fact.

The strategic and optics value of the scoring change forced the hands of the NFL to allow the play.

Most Made (Career): Marshall Faulk (7)

Prior to the two-point conversion, if a team were down by seven points, they would need to score a touchdown and the extra point to tie the game. If they wanted to take the lead, it would require two scoring drives. Needing two scoring plays to tie or win a game can be devastating depending on the game clock.

The Packers are down 20-28 to the Lions with less than two minutes left in the fourth quarter and no timeouts at their disposal. In order to tie the game, the Packers would need two scoring drives as the point differential is greater than seven. With less than two minutes on the scoreboard, the Packers’ chance of scoring a touchdown and then gaining possession back to score again before time runs out is incredibly low.

The Packers are down 20-28 with no timeouts left underneath the two-minute mark. Green Bay scores a touchdown making the score 26-28. The Packers opted to go for the two-point conversion and do so successfully making the score 28-28. The Lions’ offense takes the field thereafter. Detroit has roughly 30 seconds of game time to score to win the game and avoid overtime.

While the two-point conversion didn’t directly win Green Bay the game, it put them in immensely better contention.

The risk/reward of a two-point attempt varies by situation. Point differentials can effect win probabilities in various ways depending on the game scenario. The Seahawks matchup against the Patriots is a good example. When Seattle was up by seven in the 4th quarter after scoring a touchdown.

The almost doubled risk of a two-point conversion only led to a 3.3 point increase in win percentage in this situation. The Seahawks went for two and failed, leaving the Patriots with a seven-point deficit with roughly four minutes on the clock. Seattle didn’t win the game.

The 99.3% success rate of extra point kicks in 2014 began reverting the NFL back to monotony. As a result, the line was pushed back to the 15-yard-line thereby leading to a more balanced risk of going for one point as opposed to two.

For five consecutive seasons before the rule change, there was a 99.5% success rate with extra point kicks. The year proceeding the change, that number dropped to 95.2%. The return on investment of the two-point conversion became more attractive and less of a gamble to many coaches.

A select number of coaches began frequently opting for two points rather than one. The league, in its copy cat fashion, is echoing a similar strategy. In 2002, there were 31 two-point attempts while in 2018 there was 47, a 51.6% increase. These numbers point to a growing trend that shows no signs of slowing down.

Arguably, more teams should be opting for the two-point conversion than are. Some should be doing so even more.

Point expectancy on two-point and PAT attempts for every team. The break even line is shown in orange: teams above that line might want to consider making a two-point attempt their default choice following a touchdown. pic.twitter.com/XMUufWuKSB

The Future is Two

The Baltimore Ravens in the 2018 NFL draft selected quarterback, Lamar Jackson, with the 32nd overall pick. In the sixth round of the 2019 NFL draft, they picked QB, Trace McSorley. Baltimore could have questions about Jackson as a QB, like what they saw in McSorley, or simply needed a backup. However, a sixth-round pick is a little high for a player who’s plans are limited to the bench.

The Ravens likely have much bigger plans for McSorley than throwing to the second string receivers. In goal line formations (used often in two-point conversions) a two QB backfield can cause havoc for a defense. With the two-point conversion’s growth in frequency, it has called for personnel changes that will almost certainly lead to its growth in efficiency, which circles back to its frequency.

For most of its life, the two-point conversion functioned like an onside kick, a measure done in the twilight of a game that would otherwise be lost. Times are changing where teams are opting to use it not only more frequently but even automatically.

As NFL offense’s push the imaginable limits year after year, it only makes sense that their next area of conquering would be the two-point conversion. Passing yards per game, rushing yards per attempt, and sacks allowed are all trending in favor of offenses. With defenses on the run and a cast of talented young stars, the two-point conversion will be an even bigger phenomenon in 2019 than it was in 2018.

Grading the 49ers’ 2019 Draft Class
Why Jon Gruden is a… Genius? Post-Draft Outlook of the 2019 Oakland Raiders
%d bloggers like this: