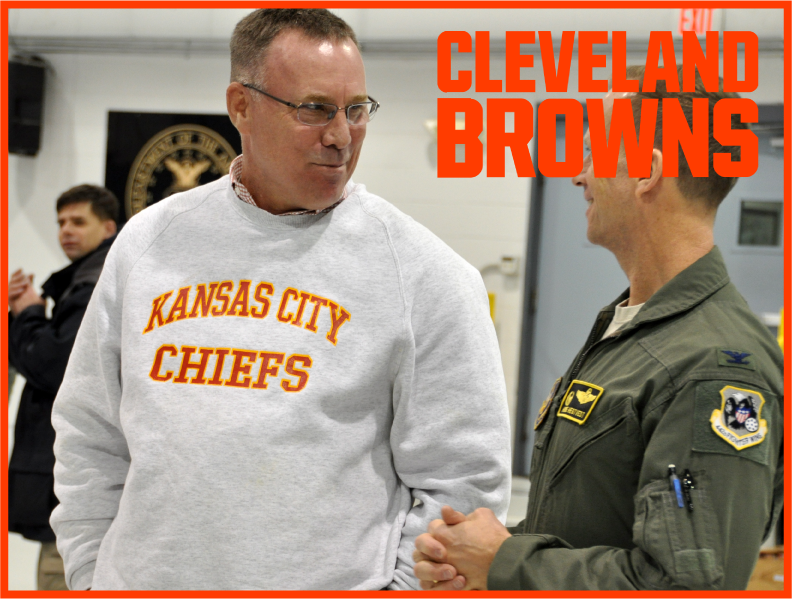 The Seldom Talked About Resume of John Dorsey, Impressive and Troubled

On December 7th, 2017, Cleveland named John Dorsey their new general manager, ousting Sashi Brown. Since Dorsey’s hiring, the Browns have won more games in one season than they had in the three seasons prior combined.

Fast-forward to March of 2019, the Browns have the fifth-best odds to win Super Bowl LIV. The Cleveland Browns went from being synonymous with incompetence to America’s New Team.

This metamorphosis is one of many impressive feats in a storied and colorful career of one, John Michael Dorsey.

John Dorsey’s football career began in pads. A former linebacker at the University of Connecticut, Dorsey started all four years in college. During his time as a Huskie, he won the Yankee Conference Player of the Year Award twice.

Young John Dorsey had the rare privilege of being drafted twice. The Green Bay Packers selected Dorsey with the 99th overall pick in the 1984 NFL draft, while the Philadelphia Stars drafted him in the seventh round of the USFL’s 1984 draft.

Dorsey chose to play for the Packers in the NFL. The Philadelphia Stars went onto win the USFL championship that season.

Dorsey retired in 1988 after playing five seasons in the NFL, all with the Packers. During his professional playing career, the ILB played 76 games, starting 15 of them. In those nearly eighty games, Dorsey forced four fumbles.

From 1991 to 1996, Dorsey served as a scout for the Packers before becoming Director of College Scouting from 1997 to 1998. During that time, Dorsey helped scout and draft Esera Tuaolo, Terrell Buckley, and Darren Sharper.

Sharper, a five-time Pro Bowler, was a dominant defensive back. By the end of his career, Sharper recorded 63 interceptions and 1,412 interception return yards. Buckley, a Jim Thorpe Award recipient, gave a defensive and special team dimension to Green Bay.

In the 1996 season, the Packers won their first Super Bowl. It was also the first of Dorsey’s career.

Dorsey was called up to Director of Player Personnel by Seattle for one season. The 1999 season became the first time the Seahawks had made the playoffs in eleven seasons.

It was in those prior twelve seasons that Dorsey began to make a name for himself across the NFL. During this time, Dorsey scouted and drafted some of the most talented and hallmark players in Green Bay (as well as NFL) history.

The Packers’ Super Bowl XLV victory in the 2010 season made for Dorsey’s second of his career.

Dorsey was promoted once again, this time to Director of Football Operations. During this time, Dorsey helped re-sign a flurry of key players. Under his rule in the draft that year, the Packers selected Nick Perry, Casey Hayward, and Mike Daniel.

Dorsey wasted no time getting the Chiefs up to speed. After going 2-14 in the 2012 season, the Chiefs improved to 11-5 in 2013. Kansas City ended up losing in the Wild Card round and would miss the playoffs the following season.

In 2015, Kansas City returned to an 11-5 record, this time losing in the Divisional round. His final year with the Chiefs, the 2016 season, Kansas City finished first in their division for the first time in six years. In 18 years, the Chiefs had only done so twice.

Dorsey’s real legacy in Kansas City goes beyond the win/loss record and playoff appearances. It is, once again, what he did in the draft. Under his reign, the Chiefs drafted Travis Kelce, Eric Fisher, Dee Ford, Zach Fulton, Marcus Peters, Chris Jones, and Patrick Mahomes. Several of those selections required complex maneuvering.

The Chiefs and Dorsey split ways on June 22nd of 2017. Dorsey remained unemployed throughout the 2017 season. While his transactional work in the front office was praised undoubtedly, his management style was brought into question. One source said it could, “wear on people.”

A glaring example of mismanagement and poor corporate communication is the story of Jeremy Maclin’s departure. The WR was let go from the team and found out via voicemail from John Dorsey.

Dorsey was hired by the Browns at the end of the 2017 season. His first chance to make changes in the organization came that offseason. In the 2018 NFL draft, Dorsey pulled the trigger on several big-name draftees: Baker Mayfield, Denzel Ward, Nick Chubb, and Antonio Callaway.

The most rushing yards by a @Browns rookie… ever!

Dorsey also signed wide receiver Jarvis Landry, one of the top receiving prospects in the league.

After the coaching shift, the Browns went 5-3. Cleveland nearly finished 6-2 in those later weeks but a 24-26 loss to the Baltimore Ravens in Week 17 kept them at 5-3.

After the 2018 season came to a close, Dorsey did not stay idle. Without any prior indication, the Cleveland Browns concluded a trade with the New York Giants. The Browns received WR Odell Beckham Jr. and traded away first and third-round picks, along with safety Jabril Peppers.

Almost immediately, the Browns jumped to an AFC favorite to contend for a Super Bowl.

Some of the QB's drafted by John Dorsey

While GM of the Chiefs, John Dorsey drafted both Kareem Hunt and Tyreek Hill. Hunt showed little known signs of impending trouble during his high school and collegiate days, minus a two-game suspension his junior year. Hill, on the other hand, was kicked off the Oklahoma State football team for domestic violence.

In December of 2014, Hill was arrested after assaulting his pregnant girlfriend. The police report states he strangled her and punched her in both the head and in the stomach. While Hill’s case was expunged after following court orders, that wasn’t until three years after the fact. Dorsey drafted Hill in the fifth-round of the 2016 Draft.

The 'juvenile' involved in the Tyreek Hill battery investigation is speculated to be Hill's 3 year old son, who sustained a broken arm.

The same son who was in the womb of Hill's pregnant fiancé, when he punched her in the stomach and strangled her back in December 2014.

The following draft, Dorsey selected Kareem Hunt. In the middle of his second season with the Chiefs, Hunt was released from the team after a video surfaced of Hunt kicking a woman in the stomach. The incident took place in a hotel, in which the two had met. In the video, Hunt is eventually pulled back by several individuals.

In February of 2019, Dorsey and the Browns signed Hunt.

Dorsey’s nonchalant attitude to domestic violence, as far as player personnel goes, is alarming. However, its not an exception to the high moral standard rule of the NFL. The Dallas Cowboys continue to “feed Zeke (Ezekiel Elliot)” and the Pittsburgh Steelers’ front office is dedicated to the success of Ben Roethlisberger.

John Michael Dorsey’s legacy of scouting acumen, drafting excellence, and front office dealings will be more heralded as time goes on. The asterisk, however, while seldom talked about, may become a painful mark on Dorsey in the years to come… or not.