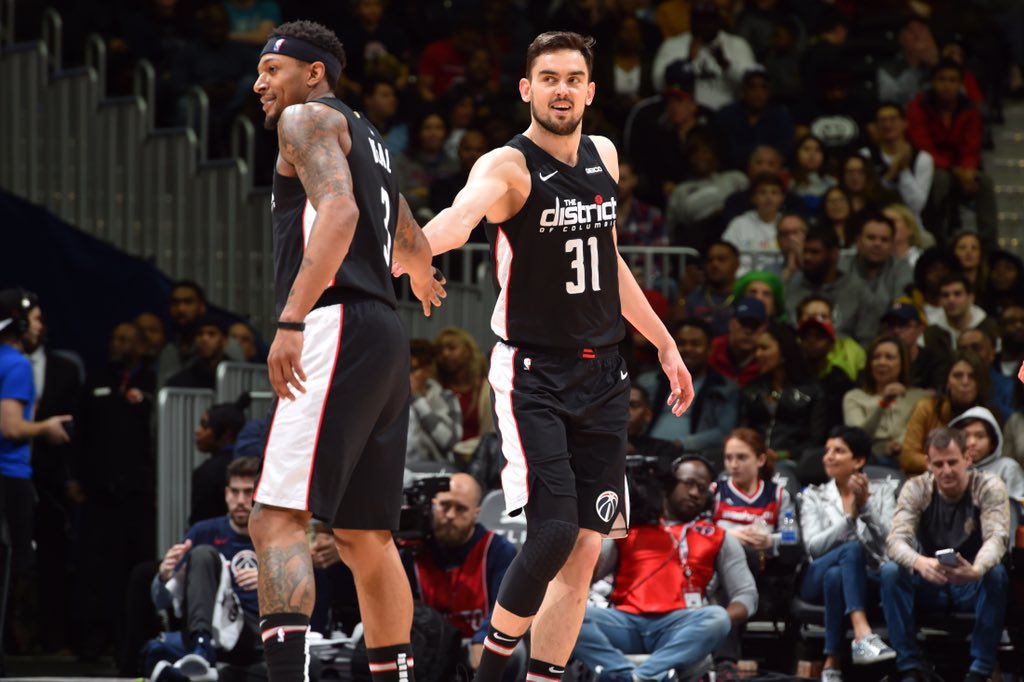 The legend of Wizards Bradley Beal is starting to become a reality for NBA teams. Every team knows he is the main option, but no one has been able to stop him. The other night versus the Memphis Grizzlies, he went for a career-best in three-pointers with nine. He finished with 40 points for the second night in a row to help the Wizards win 135-128 over the Grizzlies.

.@RealDealBeal23 scored 40 points for the second straight night, which earned him your @Biofreeze Performance of the Night.#WizGrizz | #DCFamily pic.twitter.com/DOoAiOPcC2

This was their third win in four games, but the Wizards continue to sit 3.5 games back of Miami for the final playoff spot in the East. Friday’s loss to Charlotte, a team also battling for that final spot, was huge for their playoffs hopes. They did face a challenge from Memphis, who is also towards the bottom of their conference. The Grizzlies came in shooting hot and took an early lead, 71-69, at halftime.

“The way he is playing, the way he has improved, the way he has led, in my very bias opinion, he is all-NBA,” said Wizards coach Scott Brooks about Beal. “He is doing things that, that level of player does night in and night out. He is playing good basketball, he’s leading us, that’s what he expects himself to do every night.”

Wizard teammates Jabari Parker and Bobby Portis stepped up by scoring 20 and 18 points respectively. Parker continues to look like a steal from the Otto Porter trade. He and Portis have helped the Wizards become one of the most efficient offensive teams since the trade. Tomas Satoransky has also kept up his play since becoming a starter. He had a solid game with 15 points, 7 assists, and 6 rebounds, while not missing a free-throw in nine attempts.

“Hats go off to the other team, they fought and made it a lot [more] difficult for us, it definitely wasn’t easy,” said Wizards forward Parker. He continued, “…and I really admire the way our leaders were there for us.”

The Grizzlies were led by their newest version of a three-headed monster. Mike Conley, Avery Bradley, and Jonas Valanciunas went on to combine for 71 points, but it was not enough as they could not keep up with the Wizards. The game was close, even until the fourth quarter. The Grizzlies managed to tie the game at 114 with over six minutes left. In the end, Beal scored seven of his 40 and helped hold off the Memphis charge.

Too Little, Too Late

With only twelve games left in the schedule, the Wizards may need a miracle for all the playoff pieces to fall into place. They only have one game versus the teams ahead of them in the standings. They face the Miami Heat, the team currently in the eighth place. The Wizards have an even amount of home and away games left. They also have their final west coast road trip of the season. They play host to the Utah Jazz on Monday, March 18.

Wizards Keep Playoff Hopes Alive With Win Over Kings
The Warriors Silence The Thunder 110-88 in OKC
%d bloggers like this: