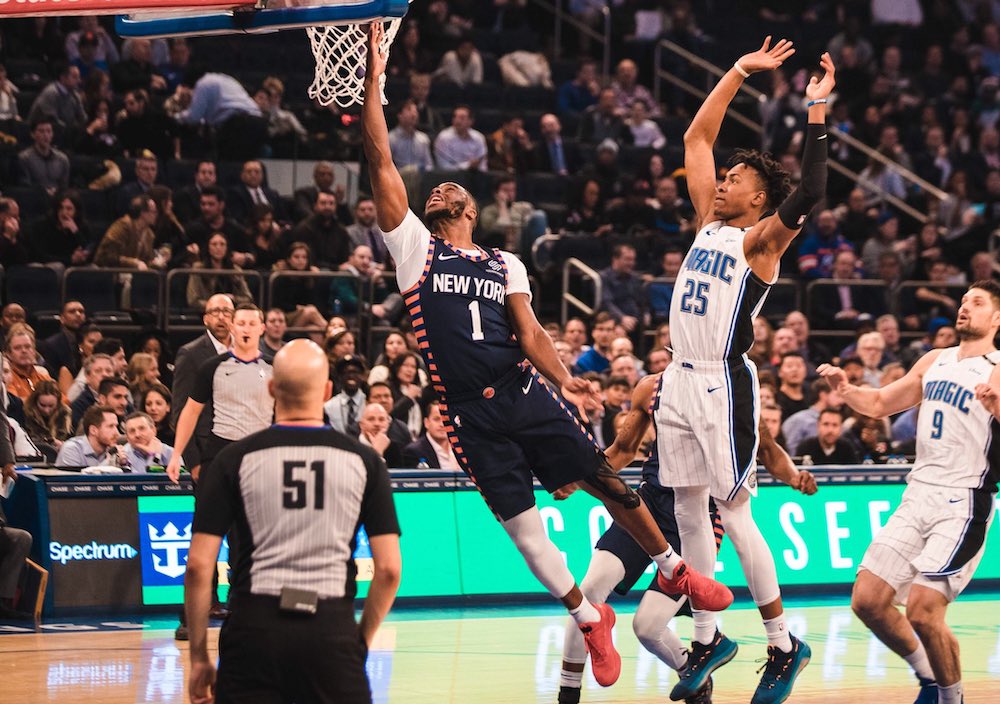 What version of the Orange and Blue are we currently watching?

After an uplifting win over the San Antonio Spurs on Sunday, the Knicks followed that performance with a win over the Orlando Magic, 108-103. Before the win over the Spurs, the Knicks lost eighteen straight home games. Now, New York has won two straight at Madison Square Garden. Lately, the fortune of the Knicks has been changing due to their improvement on the defense. Since the trade deadline, the orange and blue have transformed into a top-ten defensive team overnight.

Tonight was the night for unlikely heroes. Overall, the starters played like they forgot to eat their Wheaties in the morning. Noah Vonleh, Lance Thomas, Kevin Knox, Dennis Smith Jr., and Damyean Dotson combined to score 33 points. Not one player scored over 10 points. Luckily, for the Knicks, the players on the bench stepped their game up. Most notably, Emmanuel Mudiay, Allonzo Trier, and the two unsung heroes, Mitchell Robinson, and Henry Ellenson.

Ellenson nailed the shot heard around the Garden

First and foremost, Ellenson nailed the shot heard around the world. Well, the shot heard around the vicinity of the hailed ground of Madison Square Garden. With 4:30 remaining, in the fourth, Trier made a step-back jumper to cut the Knicks deficit to two, 100-98. On the following possession, Trier fed Robinson for the alley-oop finish to get the Garden crowd out of their seats. New York tied the game with four minutes remaining.

After Robinson’s game-tying basket, the Knicks continued to pile the defensive pressure on the Magic. Whatever spells the Magic had in their bag, the Knicks countered them with a large bottle of defensive potion. As the Magic continued to brick shots, Robinson gave New York its first lead of the game by making one of two free throws. One possession later, the big moment happened.

Jonathan Isaac missed consecutive shots, Robinson erased his second attempt and clapped him like how students use to clap blackboard erasers outside back in the day. Nikola Vucevic tried to regain the lead for the Magic afterward but failed also. Ellenson grabbed the rebound, and the Knicks were off like race horses. Mudiay spotted Ellenson trailing and passed him the ball. Ellenson spotted up from deep and nailed a three-pointer which sealed the game for the Knicks.

Ellenson finished with 13 points (3-6 from deep), 9 rebounds, and 5 assists. Mudiay, who provided the dime on Ellenson’s clutch three, led New York with 19 points. He also grabbed 8 rebounds, and the Knicks were a +23 when he was on the court. Lately, Trier has found his groove. He contributed to the win with 18 points, shooting an efficient 4-5 from the field and 9-10 from the free throw line.

Last, but not least, Robinson had himself a game. At the moment, his stock is high. If it goes any higher, Robinson might break the NBA stock market with how quickly he has improved. Tonight, he scored a career-high 17 points. He tied his career-high in rebounds, grabbing 14 boards. Also, he sent six Magic shots to different areas of the city. One landed in Brooklyn, and another landed in the Bronx. One could be seen flying over Queens. A bystander saw one land in the Hudson River. Many in Staten Island saw a basketball hit one of the ferries. As for the final one, no one knows where that ball landed.

Robinson has been the most pleasant surprise out of the Knicks rookies this season. The Knicks brass deserves a ton of credit drafting him in the second round. After his senior year of High School, he sat out a year and didn’t play any meaningful games. It would have been understandable if teams were willing to pass on him. The Knicks organization didn’t, and now, the risk is paying dividends.

Orlando squandered a 16-point lead in tonight’s loss. All-Star Vucevic led the Magic with 26 points, 11 rebounds. Aaron Gordon recovered from getting blocked twice by Robinson in one possession and had a good game. He dropped 26 points and grabbed 7 rebounds. Isaac, Evan Fournier, and D.J. Augustin scored 16, 15, and 13 points respectively. Orlando’s bench combined to produce less than 10 points, which is highly disappointing.

Next up for New York

Despite winning two straight, the Knicks (13-48) remain a strong contender in the Zion Williamson sweepstakes. Currently, the Knicks sit in second behind the terrible Phoenix Suns (12-50). Next up for the Knicks are fellow tanking contenders, Cleveland Cavaliers. The game will take place on Thursday night at Madison Square Garden.