First Place Bucks Too Much For Wizards 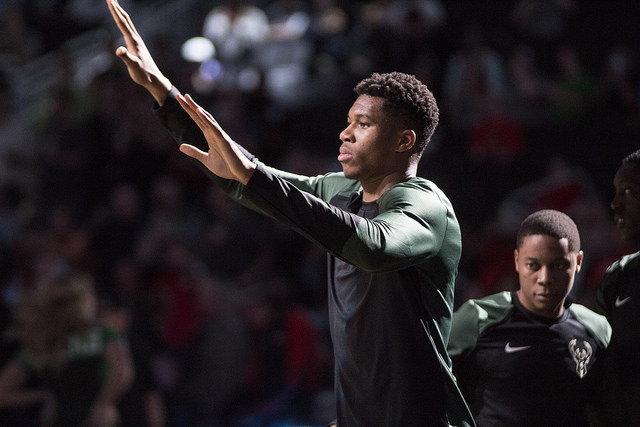 First Place Bucks too much for Wizards

The Milwaukee Bucks brought their NBA best record (38-13) to D.C., and it was apparent early why they have been one of the pleasant surprises of this season. Giannis Antetokounmpo, once again, led the Bucks with 37 points and 10 rebounds. He dominated the game, especially from the foul line where he made all 17 attempts. The Wizards were no match for the hottest team in the league and fell 131-115.

The Greek Freak set a franchise record for most free throws without a miss tonight, going 17-17 from the line!!#FearTheDeer | #Giannis pic.twitter.com/e0wvSJvGb1

Bradley Beal had 24 points, but it was not enough as all five Bucks starters scored in double figures. Brook Lopez and Khris Middleton both added 20 points each. The Bucks took a double-digit lead early on, and the game was never close after that. They led by 23 at halftime after scoring 73 points on the short-handed Wizards.

The Bucks played short-handed, missing starting point guard Eric Bledsoe due to a sore left achilles tendon. Backup guards George Hill and Pat Connaughton picked up the slack and combined for 20 points. The Bucks used sharp shooting from deep to put away the Wizards, hitting 17 threes while shooting 44%.

A minute into the first quarter, the D.C. crowd had something to cheer about. After a steal by Beal, Tomas Satoransky went streaking down the court on a fast break. The only man between him and the rim was Lopez. The Wizards guard went up strong versus Lopez and hammered down a dunk that even drew a reaction from the Bucks bench. Unfortunately for the Wizards, that was the high point of the game as the Bucks pulled away early and never looked back

Beal will be joined by the Bucks Middleton at the 2019 All-Star Game. They were chosen to be reserves by NBA coaches. The selection among the other reserves by the captains is February 7th on TNT, during the All-Star draft. This will be Beal’s second consecutive All-Star game as he is averaging career highs in points, assist, and rebounds. Middleton has been an important part of Milwaukee’s success this season and is averaging 17 points, 6 rebounds, 4 assists, and one steal per game.

Too little, too late?

The Wizards currently sit in tenth place in the Eastern Conference. They are 5-5 in the last ten games and have been playing relatively well, before the Bucks game. The Wizards have been playing without three starters, but are getting career years from players like Beal, Satoransky, and Thomas Bryant. The team played well without John Wall last season and only sit a game and a half out of the final 8th playoff spot. They are expecting some reinforcements after the All-Star break with Markieff Morris and Dwight Howard returning from injuries. Another option is finding a player in the buyout market, thanks to $6.8 million in cap relief due to Wall’s season-ending injury.

The Wizards host the Hawks next, in a home game on February 4. Then they have a rematch versus the Bucks on the road on February 6, which will be a national game on ESPN. They finish off the week with back-to-back games at home versus the Cavs, so this may be the moment they make a move for that last playoff spot.

Celtics Deliver 12th Straight Loss to Shorthanded Knicks
Raptors Bounce Back Against the Clippers, win 121-103
%d bloggers like this: