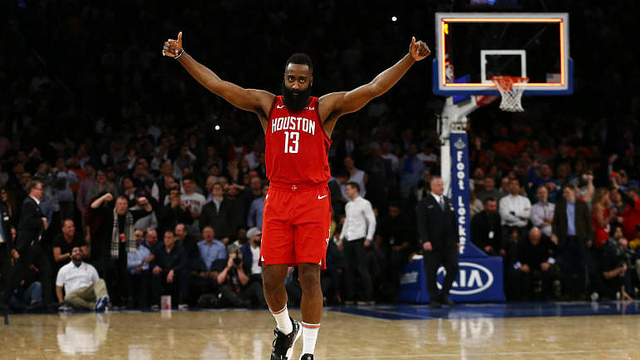 Everyone, the “Knicks Tank” is in prime form. Granted, James Harden did tie Kobe Bryant‘s record for most points scored by an opponent at Madison Square Garden (61 points), but despite Harden’s herculean effort, the New York Knicks still had a chance to defeat the Houston Rockets. Unfortunately, the Knicks revved up the tank and found another creative way to lose a game.

In the fourth quarter, the Rockets were serving the Knicks the win on a silver platter. With less than a minute to go, the Rockets led 107-101. At that moment, it seemed like the Rockets were about to shut the door on a Knicks comeback. Then the blunders ensued. P.J. Tucker made the first Rockets blunder when he fouled Allonzo Trier on a 3-point attempt. Trier proceeded to make all his free throws to cut the Rockets lead to three. On the following possession, the unthinkable happened.

After Trier made his last free throw, Eric Gordon inbounded the ball to Tucker. In calamitous fashion, Tucker didn’t pick up the ball and allowed it to bounce a few times. Noah Vonleh, being alert to the action, snuck in and stole the ball, then finished at the rim. Currently, authorities are unaware of what happened to Tucker on that play. Maybe the “Monstars” temporarily stole his basketball IQ. Whatever the case may be, Tucker’s blunder led to the Knicks cutting the Rockets’ advantage to one.

Knicks retake the lead thanks to Emmanuel Mudiay and Allonzo Trier

James Ennis III tried to make up for Tucker’s blunder by attempting a 3-pointer, but he missed. Trier grabbed the rebound and pushed the ball up to Emmanuel Mudiay, who got fouled on his way to the rim. Mudiay made both free throws, and the Knicks took a 108-107 lead. Afterward, Tim Hardaway Jr. made the first Knicks blunder.

Harden had the ball a few feet behind the 3-point line, and the Knicks double-teamed him. Hardaway Jr. was a bit too aggressive on the double-team and allowed Harden to dribble into him to create the foul. Following the foul, Harden made both free throws to restore the Rockets’ one-point lead. Later, Trier responded with a driving layup to regain the lead for the Knicks with 20 seconds remaining.

Eric Gordon and Harden seal the win for the Rockets

The Knicks had the momentum, and it seemed like Gotham’s fallen heroes would pull out the win. Unfortunately, a Knicks win wasn’t meant to be as Gordon drained a deep 3-pointer to give the Rockets a two-point lead with 11.4 seconds remaining. Despite Gordon’s cold-blooded shot, the Knicks still had a chance to win. Unfortunately, the Knicks failed to do anything with their last possession.

On the inbounds play, Vonleh caught the pass in space. Gordon and Harden proceeded to double-team Vonleh, which put him in a precarious position. Vonleh should have held the ball up to pass to an open teammate, but instead, he opted to dribble out of the double-team. Gordon ended up stealing the ball from him and fed Harden for the easy one-handed slam on the fast break. Harden’s emphatic slam sealed a 114-110 victory for the Rockets.

Gordon and Harden did all the scoring for the Rockets

Besides Harden’s epic 61-point performance — which included 15 rebounds, 5 steals, and 22 made free throws to his name — Gordon also contributed with 20 points. As a team, the Rockets shooting was below par (41% from the field and 25% from deep), but their defense was impeccable. Overall, the Rockets forced the Knicks into 19 turnovers which led to 30 easy points.

Despite the tough loss, there were many positives for the Knicks in this game. The most notable positive was the performance of Trier. He finished with a career-high 31 points to go with 10 rebounds. Also, he had a team-high plus-minus of +19. In addition to Trier’s stellar play off the bench, other players in the Knicks’ second unit also stepped up.

Damyean Dotson‘s 8 points in the fourth quarter helped lead the Knicks back into the game. He also had a great plus-minus of +15. Mitchell Robinson may have fouled out in 17 minutes, but his impact on the game was undeniable. Besides blocking Harden twice on the perimeter, he played with high energy on offense and defense. He shot a perfect 5-of-5 and scored 12 points. Frank Ntilikina also made an impact despite not scoring. He distributed the ball well (6 assists) and played good defense as usual.

Beware NBA! The “Knicks Tank” is in pristine condition. There’s no wear and tear on the tank, and the next stop on the road to Zion Williamson will be against the city rivals, the Brooklyn Nets, in Brooklyn.

Key Note: David Fizdale was ejected late in the fourth quarter. What a legend!

Subscribe to get the latest news from TSJ and the TSJ 101 Sports TV Youtube channel! Play and win weekly at Thrive Fantasy!

Timberwolves Beat Suns In Back-to-Back Games
Victor Oladipo Out For The Season Due To Ruptured Quad In Right Knee
%d bloggers like this: