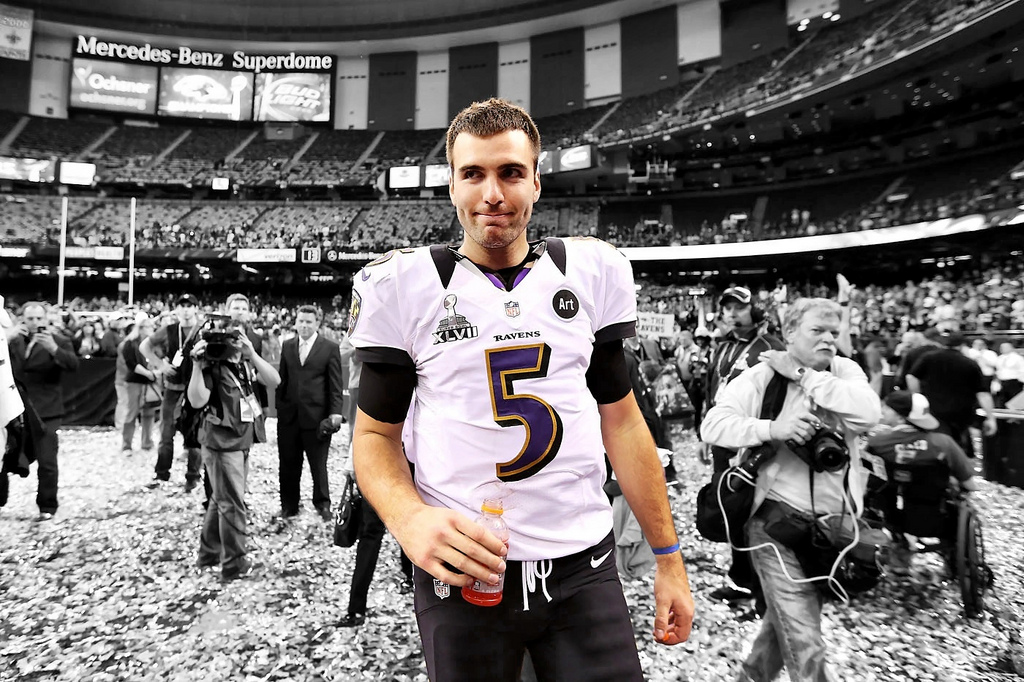 Where Will “Joe Cool” Land After Departing Baltimore?

The Flacco era has finally come to an end in Baltimore. Head coach John Harbaugh named explosive rookie Lamar Jackson as the starting quarterback over long time QB Joe Flacco. Baltimore essentially backed the decision by announcing that they will likely “move on” from Flacco following the 2018 season.

Lamar Jackson put together a historic stretch in his first five starts for the Ravens, leading the team to a 4-1 record as the starter. Jackson rushed for at least 70 yards in all five starts. As a result, the Baltimore rush offense has exploded, piling on 194+ rushing yards per game in all of Jackson’s starts. The Ravens are now second in the league in rushing yardage per game.

Regarding Flacco, the Ravens nipped all concerns that the relationship between themselves and the veteran QB had soured. Baltimore not only made it clear that Flacco would be “treated with class” throughout the process, but that being traded to the team of his choice is “doable.”

This would be an extremely respectful gesture from the organization, yet that stills leaves one question for the University of Delaware alumni: Which team should Flacco choose?

The #Ravens are going to treat Joe Flacco with class and trading him to a team of his choice is also possible (and his salary makes that doable). https://t.co/gRVRAquXeI

The New York Giants have struggled offensively over the last few years on many levels. The offensive line hasn’t ranked above 24th all season, as protecting quarterback Eli Manning has been an issue for the group. In fact, the Giants offensive line has given up 46 sacks this season, good for fourth-worst in the league.

While protection might be a concern, Joe Flacco would be a good fit for New York for a few reasons. Flacco’s experience and calm demeanor in big situations is something the Giants need. Additionally, his arm strength is something that New York has been missing with Manning.

Beckham, himself, stated in his controversial interview with ESPN earlier in the season that he wants a quarterback with a big arm who can “go over the top of somebody.” Although the Giants are likely to stick with Eli for the 2019 season, Flacco has proven throughout his career that he can sling the football with the best of them. If the Giants do decide to move on from Eli Manning, look for the team to pursue Flacco.

The Giants aren’t the only NFC East team that provides a great fit for Joe Flacco. Washington also runs a system that Flacco could succeed in. Couple that with reports that quarterback Alex Smith is unlikely to return for the start of the 2019 season, and everything points to Washington signing Flacco this offseason.

Washington has a formidable squad, but are thoroughly missing the presence of Smith on the team. Flacco could serve a similar “dink-and-dunk” role down the field that Smith did, keeping the defense off the field much longer.

In fact, this Redskins’ roster is very reminiscent of the more recent Baltimore Ravens’ rosters. While lacking the playmakers that many other teams in the league possess, the team can get the job done with a mid-tier quarterback. As the Redskins look for replacements for Smith, look for Flacco to be on top of their list.

The Denver Broncos remain one of the biggest disappointments of the 2018 NFL season. Undrafted rookie running back Phillip Lindsay has been on a tear the entire season, though, and remains one of the Broncos’ key players. Lindsay is averaging 5.4 yards-per-carry, the second-highest average in the league. Rookie wide receiver Courtland Sutton has also been explosive, averaging the fourth-most yards per catch with 17.5 yards-per-reception.

Denver’s’ defense has shown how much it has to offer to this team as well. Denver’s pass-rushing duo of Von Miller and Bradley Chubb have a combined 26.5 sacks on the season with two games remaining. So, why hasn’t this team been successful?

For starters, free agent quarterback signee Case Keenum has put together an awful season for the Broncos. Keenum ranks 29th in the league in passer rating and 26th in completion percentage. Joe Flacco could solve many of the Broncos’ problems at quarterback.

Flacco has the arm strength necessary to both match Sutton’s vertical speed and feed wide receiver Emmanuel Sanders the ball. Flacco can also keep the defense off the field longer, making that Broncos pass rush that much more dangerous. Look for Flacco to make a huge impact on this Denver team if the Broncos decide to cut ties with Keenum this offseason.