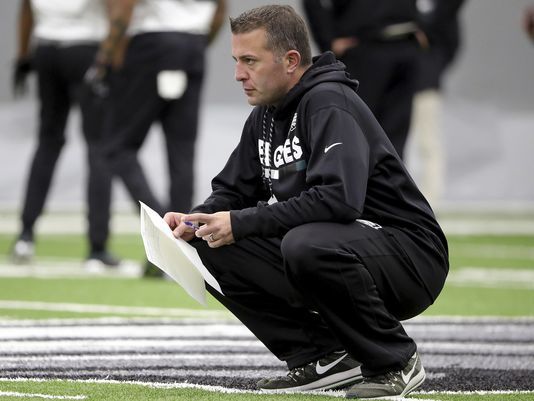 The Minnesota Vikings fell to the Seattle Seahawks 21-7 on Monday Night Football. Minnesota went scoreless in the first of the game. Their first five drives ended in a punt before a turnover on downs ended their sixth drive. After that, a missed field goal and a fumble would proceed their eventual touchdown.

The loss didn’t cost them the sixth seed they currently hold; however, it certainly narrows the Wild Card race they’re winning by only half a game. Minnesota’s weak offensive performance on Monday was emblematic of the majority of their season.

They were projected to be Super Bowl contenders during the preseason, yet currently, a tie is the only thing keeping them above the .500 chopping block. After consideration, the Vikings’ front office decided coaching-staff changes were needed. Offensive coordinator, John De Filippo was the first to go.

The Minnesota Vikings were ranked fifth in the NFL power index prior to the season’s start. The dominant defense from the year before was returning, the wide receiving core that lifted Minnesota to the NFC title game was back, and they had upgraded in a few key positions. The first move came by signing free agent quarterback, Kirk Cousins for three years costing just $84 million.

To go with their new shot caller, the Vikings called up John DeFilippo, the quarterbacks’ coach of the newly crowned Super Bowl champion Philadelphia Eagles. DeFilippo had been a QB coach in the NFL since 2007 with the Oakland Raiders. After a quick two-season stint back in college, he returned to his old role in Oakland in 2012.

In 2015 he was the OC for the Cleveland Browns, before being hired as the QB coach in Philadelphia for two. It was his time in Philadelphia that inspired the Vikings to tap him for the OC job. After starting quarterback, Carson Wentz went down late in the season, DeFilippo helped spearhead the creation of a new offense for backup quarterback Nick Foles.

What Minnesota has been missing is a run game. Running backs Latavius Murray and Dalvin Cook have proven to be an ineffective backfield duo. Behind the 14th ranked offensive line, Minnesota’s run game is the third worst in the league. Despite the difficulties on the ground, the Vikings have still failed to meet reasonable expectations. With the talent they’ve invested in, the eighth-best passing game isn’t going to meet the mark.

It’s unclear how much of these woes are to blame on DeFilippo. It’s long been speculated that Kirk Cousins on average is a game manager, and in big situations fails to do that. Cousins’ poor in-game decision making that was on full display on Monday Night, could  be the source of the problem.

However, head coach Mike Zimmer is defensive-minded, so from a clipboard perspective, this offense is likely DeFilippo’s completely. If his offense wasn’t sound, or, just wasn’t working for Minnesota’s $84 million, 3-year investment, DeFilippo was absolutely going to see the door.

See Ya on the Flip Side

Several coaching positions have opened up around the NFL as of late. The Green Bay Packers and Cleveland Browns are looking for a new head coach. The Browns could also be looking for a new offensive coordinator. Openings in Arizona, New York, and Seattle are also possibilities for DeFilippo.

The most likely job openings for the coach will be either offensive coordinator positions or quarterback coach. The chances of him receiving a head coaching job offer are low. DeFilippo has never obtained that position nor has he had great success as an offensive coordinator, not all to his fault. Some teams though may be willing to take the risk.

Maybe the best landing spot for him is one he is quite familiar with, the City of Brotherly Love. Philadelphia’s pitiful season has brought out the worst performances of head coach Doug Pederson and QB Carson Wentz. The offensive scheme feels confused, and the first-quarter scripted plays often seem to get scratched in favor of two-minute offenses.

DeFilippo’s return could be just what Philadelphia needs and just the environment he can thrive in.

The Outlook for the Vikings

The Vikings’ QB coach, Kevin Stefanski, has been named interim OC for the team. It is unknown as of yet whether he will be named the OC for following seasons or if Minnesota will begin a job search.

The Vikings have two more years left on Cousins’ contract. Divided by three, each year of his contract comes out to $28 million. A 6-6-1 record in Week 15 is worth far less than that. It’s crunch time in Minnesota to figure out what pieces are missing to make Cousins successful in this offense to get their money’s worth. If it turns out the problem is Cousins, the road to reconstruction will be long and painful.

The Vikings have just five draft picks this year after losing two in trades with the Broncos and Giants. An upgrade on the offensive line could help improve their offensive standing and protect their assets.

The run game, however, is what’s most deserving of their time and attention. Murray and Cook are not working in the backfield. One of the two may very well have to go. Picking up a young talented back in the draft, or, in a trade would help their playoff push drastically.