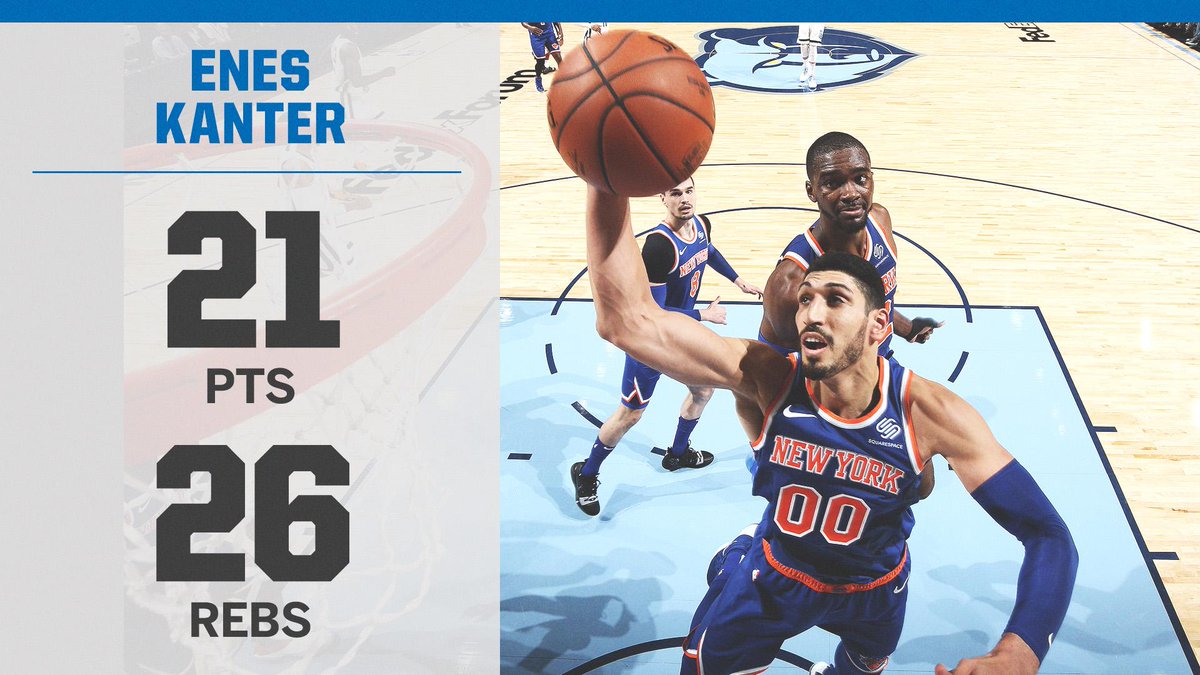 Enes Kanter led the way for the Knicks

“New York Knicks” and “three-game winning streak.” It has been a while since both terms were used in the same conversation, until last night. Led by Enes Kanter, the Knicks squeezed out a 103-98 victory over the Memphis Grizzlies on the road. So far, the Grizzlies have been formidable at home, but the Knicks made sure to deliver a loss using same-day shipping at the FedEx Forum.

The player who impressed the most during the delivery was Kanter. It didn’t matter who was guarding Kanter in the paint, no one on the Grizzlies could stop him. Marc Gasol was too slow to keep up with Kanter’s plethora of moves in the paint, and Jaren Jackson was too weak to handle Kanter’s bulldozer finesse. Kanter’s strength dominated Jackson to the point where an imaginary LaVar Ball could be heard echoing “you too small” in the background.

Kanter finished with 21 points and a career-high 26 rebounds. As usual, Tim Hardaway Jr. came to the party scoring buckets. Hardaway Jr. didn’t have a great game shooting the ball (6-of-16), but he made all seven of his free throws. He led the Knicks in scoring with 22 points. Trey Burke and Emmanuel Mudiay also played a vital role in the Knicks victory.

Both Burke and Mudiay combined for the play of the game to guarantee a Knicks win. With 1:49 remaining in the fourth, Burke made two free throws to give the Knicks a 94-93 lead. On the next play, Garrett Temple was looking for Mike Conley off a curl to feed him the ball. Burke read Temple’s pass and cut into the passing lane to steal the pass.

As Burke was running the fast break, he spotted Mudiay speeding to the basket. Mudiay received a bounce pass from Burke and continued towards the basket with full steam ahead. The only player standing in the way of Mudiay and the basket was Temple. Mudiay, with no regard for life, lifted off and slammed it one handed over Temple, and to add insult to injury, Temple fouled out on the play. What made this play so special was the fact that Mudiay caught a body with his weak hand.

The only thing that would’ve made that play sweeter is if Mudiay ran up the court afterward, staring at his right hand like Shaquille O’Neal. After his fantastic slam, Mudiay finished off the three-point play by making the free throw to give the Knicks a 97-93 lead. Mudiay finished the game with 17 points, and Burke contributed with 15 points.

The Knicks beat the Grizzlies at their own game

Throughout the game, the Grizzlies forced their pace on the Knicks. Since arriving in New York, David Fizdale has implemented a fast pace offense which feeds off of turnovers created by the defense. But the Grizzlies made sure to force the Knicks to operate in the half-court and limit fast break opportunities. Despite the Grizzlies strategy nearly working to perfection, the Knicks, utilizing the Grizzlies’ “grit and grind” mentality, were able to pull out a win.

Gasol led all Grizzlies scorers with 27 points. He also finished with 8 rebounds. Conley had a productive game scoring the rock and setting up his teammates. He scored 23 points and dished out 11 assists. Jackson held a premier block party for all Knicks players. He had 7 blocks to go with 16 points and 6 rebounds. Overall, the Grizzlies had 19 blocks in the game.

This win must have been satisfying for David Fizdale

Returning to his old stomping grounds, Fizdale received a decent ovation from the Memphis crowd. Before signing with the Knicks, Fizdale coached the Grizzlies to a playoff berth in the 2016-17 season. Later, he was let go after 19 games in the following season mainly due to a tiff between him and Gasol. This win had to be satisfying for Fizdale for two reasons.

The first reason being any competitor always loves to get one over on his former team. Fizdale may play down the importance of the win, but deep down inside, he’s probably happy to get some form of revenge against the Grizzlies. The second reason being the Knicks needed the win. Now, the Knicks are on a three-game winning streak, and the young players are playing with more confidence in late game situations.

It’s too early to tell, but it seems like Fizdale has righted the ship with the Knicks.

Mavericks Pull Away From The Celtics, Win 113-94 At Home
Should the Celtics Continue to Start Marcus Smart?
%d bloggers like this: