New York Knicks Lose Late To Middleton And The Bucks 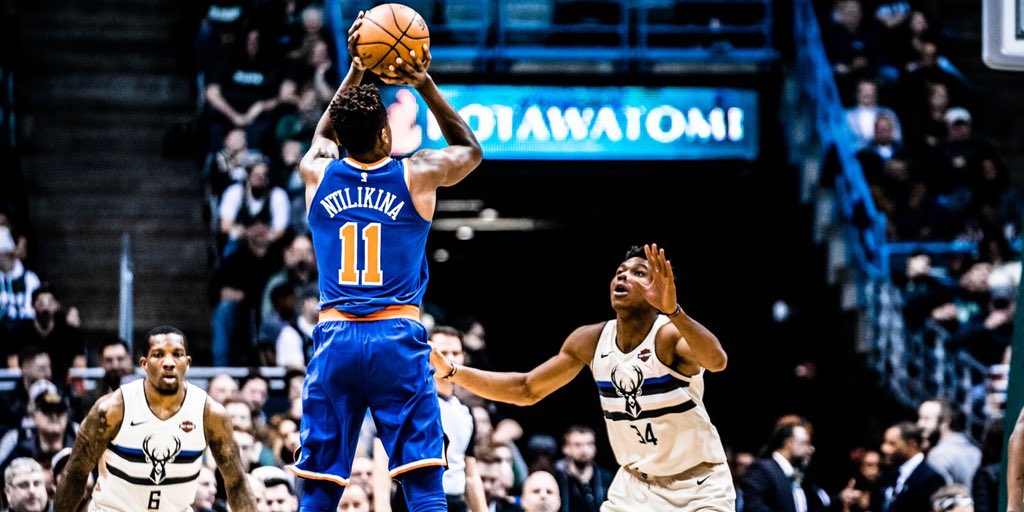 Antetokounmpo And Middleton Stole The Show

Defense has been the New York Knicks forte early this season. Against the Milwaukee Bucks, the Knicks showed flashes of their improved defense, but it wasn’t enough to stop Giannis Antetokounmpo or Khris Middleton.

Over the summer, Antetokounmpo bulked up, and it showed against the Knicks. In the paint, he played like he was auditioning to play the role of Hulk in the Avengers. Recently, he has improved his outside game, but his bread and butter is domination in the paint. It didn’t matter who was guarding him, Antetokounmpo brushed Knicks’ players aside using his sheer strength. He finished with 31 points and 15 rebounds. Nine of his fifteen rebounds were offensive boards.

Middleton has earned the reputation of a 3-and-D type of player during his time in Milwaukee. Last night, he made sure to serve the Knicks an extra dose of threes. 21 of Middleton’s 30 points came from long range, and he nailed some big shots late to guide Milwaukee to a 124-113 victory at Fiserv Forum.

Knicks vs. Bucks was a game of runs

Throughout the game, every time the Knicks pushed, Milwaukee pulled. They had multiple attempts to overtake the Bucks, but they couldn’t accomplish the feat. In the first half of the second quarter, both teams were exchanging baskets.

Milwaukee was able to hang on to a slight four-to-eight point advantage until Middleton exploded. After Burke’s basket, midway through the quarter, Middleton unleashed a barrage of three straight three-pointers to increase Milwaukee’s lead to fifteen. At halftime, the Bucks led 71-52.

In seasons past, the Knicks would just lay down and take their impending loss. So far this season, laying down hasn’t been happening on David Fizdale’s watch. They came out with renewed energy in the third quarter to bite into Milwaukee’s large lead. Burke put the squad on his back and scored 13 points in the quarter, cutting Milwaukee’s lead to one.

Comebacks have been a staple of the Fizdale led Knicks early in the season. New York outscored Milwaukee 35-17 in the third quarter.

On several occasions, late in the game, New York had an opportunity to take the lead but failed. With 3:42 left, Hardaway Jr. makes a huge three to tie the game at 110. Bledsoe traveled on the following possession to give New York a chance to take the lead. The ball moved around and landed in the hands of Mario Hezonja. Hezonja rose up from Madison, Wisconsin and shot an ill-advised three that bricked. Brook Lopez made New York pay for Hezonja’s miss with a 3-point play.

Following Lopez’s basket, Hardaway Jr. shot a rushed three from the corner that caught nothing but air. Middleton made sure Hardaway Jr.’s shot wouldn’t go unpunished and nailed a 3-pointer to push New York’s deficit to six. The Knicks couldn’t recover from Hezonja and Hardaway Jr.’s bad shots. Later, Middleton shoved the dagger deeper into New York’s heart with another three to put the game to rest.

Despite the loss, the Knicks bench shined

Kevin Knox‘s injury has led to more minutes for Hezonja and Damyean Dotson. Both players didn’t disappoint against the Bucks. Hezonja shot 50% from the field and finished with 18 points. Dotson was a flamethrower from three. He made 4-of-8 threes and finished with 14 points, 8 rebounds. Overall, the Knicks bench scored 47 points.

New York has yet to learn how to close out games which is understandable. It takes time for a young squad to learn how to push themselves over the top. Hopefully, the young Knicks will learn sooner rather than later.