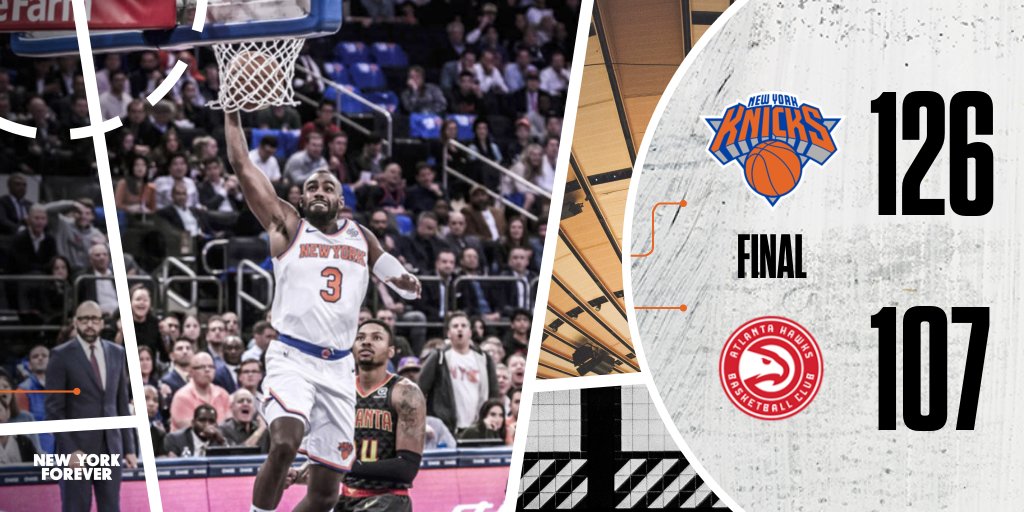 Led by Tim Hardaway Jr’s 31 points, the New York Knicks put the Atlanta Hawks to the sword with an impressive 126-107 victory at Madison Square Garden. Throughout the game, the Knicks took a page out of the bible of Walt Frazier and played intense defense from start to finish.

Kevin Knox couldn’t buy a basket. He scored 10 points on 4-of-15 shooting. Despite Knox’s rookie struggles, his teammates picked up the slack. Enes Kanter (16 points and 11 rebounds) and Noah Vonleh (12 points and 10 rebounds) both finished with a double-double. Also, Trey Burke picked up where he left off last year with a 15-point performance.

Atlanta jumped out to an early 8-point lead due to the Knicks offensive ineptitude to start the game. The Knicks missed their first nine shots, but the starters were able to recover and cut the Hawks lead to one at the end of the first.

Before the start of the second quarter, coach David Fizdale must have had a spirited talk with his troops because the Knicks had an offensive onslaught for the ages.

Defensively, the players were creating turnovers and deflecting passes at will. Offensively, the Knicks scored a franchise-high 49 points. Hardaway Jr scored 16 of his 31 points in the second, and he played a vital role in the 23-7 run which opened the game for the home team.

To start the third, Burke applied pressure on the Hawks. Burke nailed a three-pointer and assisted Lance Thomas on a three-pointer to propel the Knicks to a 28-point lead, their largest lead of the game. Atlanta followed Burke’s spark with a run of their own.

Taurean Prince, Kent Bazemore, and Alex Poythress knocked in three straight three-pointers to cut the Knicks lead to 13. Overall, the Hawks made their first six three-pointers to start the third after shooting 2-14 from deep in the first half. Despite finding their range, that’s as close as the Hawks would get.

Allonzo Trier ended the Hawks run with a layup. He also sent the Hawks packing when he drove past Trae Young and finished with the hammer at the rim to end the third quarter. If there were any Knicks fans still sleeping on Trier, they woke up after his emphatic slam. Trier finished with 15 points in 26 minutes.

After three quarters the Knicks led 106-84. The last time the Knicks scored over 100 points in three quarters was Carmelo Anthony‘s 62-point performance game against the Charlotte Bobcats in 2014. For the Knicks to have continued success this season, the formula was laid out in tonight’s season opener.

With the Knicks being the youngest team in the NBA, the players have the athleticism to disrupt an opposing team’s offense. By doing so, the players will be able to get out on the fast break and use their speed to create easy baskets.

Also, with Kristaps Porzingis out, the Knicks need a go-to scorer. Hardaway Jr can fill this void as long as he’s efficient. Often, Hardaway Jr has a habit of settling for threes — last season 48% of his shots were from deep — but when he mixes in driving into the lane and drawing fouls, he becomes a more efficient scorer. Tonight, Hardaway Jr shot 10-of-22, but he made all eight of his free throw attempts.

There aren’t many expectations of the Knicks this season, but if the players continue to put in tonight’s effort consistently, the Knicks will be a nuisance for any team who faces them.