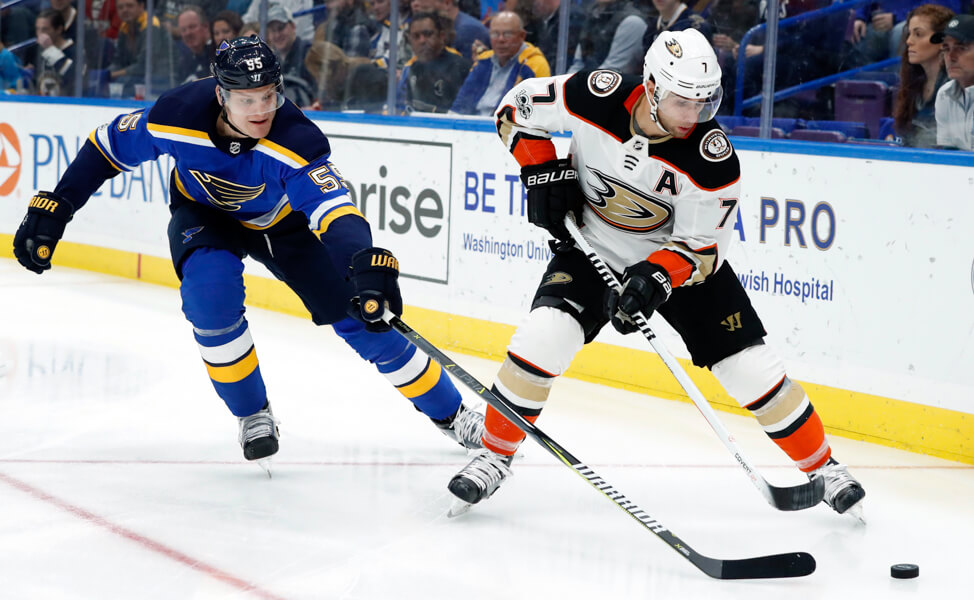 The St. Louis Blues had back-to-back games this weekend and took one of the possible four points. Against Chicago on Saturday, the Blues battled back, took the lead, and gave up a late goal that would send the game to overtime where the Blackhawks would end up scoring in the final seconds. Sunday the Blues played Anaheim and lost 3-2 in regulation. Let’s recap the game.

With just under a minute to play in the period, the St. Louis Blues have the puck in offensive zone. Patrick Maroon gives a backhand pass to Joel Edmundson who takes a shot. The shot is blocked and hits the tape of Max Comtois who looks down ice and throws it to Jakob Silfverberg who skates towards Chad Johnson on a breakaway. He skates in and picks a corner over Johnson’s glove for a goal.

The Blues have the puck in the zone with 8:23 to go in the second. Vladimir Tarsenko skates to the slot and takes a shot that is saved and directed to the corner. Ryan O’Reilly gathers it and slides back to Tarasenko who skates along the boards. He gets to the blue line and throws it across to Joel Edmundson who waits for a lane. Edmundson fires it waist level and into the goal off of Alexander Steen for a BLUUUEESSS GOAL.

While the Ducks were on the powerplay, Alex Pietrangelo takes a slash to the hands drawing a penalty that would lead to a 4-on-4 then Blues powerplay.

The Blues now have the powerplay, it’s Vince Dunn with the puck at the point. He sends it to Vladimir Tarasenko who skates down low and gives a pass to Pat Maroon who turns to stuff it in. The puck hits the pad of Ryan Miller and the rebound finds the stick of Tyler Bozak who wacks it in to the net for his first ever BLUUUEESSS GOAL.

Jordan Kyrou flies in to the zone with 14:40 to play in regulation. He skates all the way around the zone and throws it across the ice to a wide open man. Jordan Schmaltz receives the pass and tries to flip it over the pad of Miller but is stopped and the scoring chance is denied.

Two minutes later, Kiefer Sherwood wins the offensive zone faceoff to Josh Manson who sends it to Cam Fowler. Fowler sends it back to Manson who winds up and claps a slap shot at the mass of players in front of Chad Johnson. The puck hits a man in front and goes into the net for a game tying goal.

With 7:15 to go in the third, the Anaheim Ducks dump the puck in. Joel Edmundson turns around to catch the ricochet off the boards when Brian Gibbons flies by and steps on the Edmundson’s stick. Gibbons takes a dive and draws a penalty, putting Anaheim on the powerplay.

Hampus Lindholm of the Ducks is bringing the puck up center ice with 15 seconds to go on the powerplay. He sends to the near wall to Andrew Cogliano who carries the puck in deep. Once in deep, Cogliano loses the puck. Alex Pietrangelo tries to pick it up but swings and misses as he skates backwards. The puck sits still and is swept away by Cogliano to Ryan Kesler. With Pietrangelo behind the net, Jay Bouwmeester slides way away from his position in front of the net. Kesler takes a shot that is saved but the rebound is batted in by Cogliano for a goal. This goal would have never happened if Jay Bouwmeester would have stayed in his position.

The bad play by the defense leads to another heartbreaking loss early in the season. Chad Johnson did just about as good as a backup should do. He stopped 28 of 31 shots. The Blues’ defense needs to step up and the coaching staff needs to change the neutral zone and D-zone set ups.

In the neutral zone, the Blues are playing a 2-3 set up. In a 2-3 set up, two forwards are up high while the third forward slides down and is with the two defensemen. This was a good set up back in the early 2000s. With the speed and skill of today, the defensemen tend to not trust the forward. Meaning, the defensemen do not want to step up which gives the attacking team an easy passage in to zone.

In the D-zone, the Blues look to be playing man-to-man defense instead of a collapsing zone defense. In a man-to-man defense, a player picks an opposing attacker and follows him around the zone. Man-to-man is not a great choice. With the speed and skill of today’s NHL, all your defenders will do is wear themselves out. This allows for third period breakdowns, which the Blues have been doing.