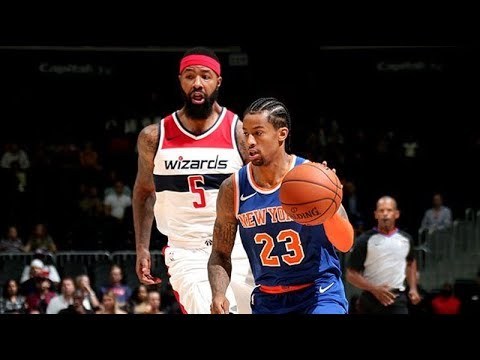 The David Fizdale era is off to a tremendous start. The New York Knicks clawed their way to a 124-121 overtime victory over the Washington Wizards. They started off their preseason on a positive note.

Already, it’s evident that coach Fizdale has his fingerprints on the Knicks’ style of play. Throughout the game, the Knicks used their high intensity on defense to create turnovers and get out on the fast break. At times, it seemed like they were trying out for roles in the next Fast and Furious with the speed at which they were playing.

Coming into the season, Steve Mills and Scott Perry laid out a blueprint. That blueprint is building a young and athletic team capable of competing on both ends of the floor. After yesterday’s game, it’s clear that Mills and Perry are on the right track to resurrect the Knicks franchise, which has been in the doldrums for years.

Knicks Stepped Up Their Defensive Effort In The Second Half

In the first half, the Knicks played solid basketball, but mental lapses on offense led to a 62-57 halftime deficit. Last season, they were notorious for coming out sluggish in the third quarter. However, in last night’s game, that wasn’t the case. They jumped out on a 14-0 run to take a 71-62 lead. Their defense played a vital role in getting themselves back into the game. Frank Ntilikina and Kevin Knox hit back-to-back threes to cap off the run.

Knox was one of the definite bright spots for the Knicks. The ninth overall pick in this year’s draft finished with a double-double (13 points and 10 rebounds) in his first game as a Knick.

Late in the fourth, the Knicks held 108-105 lead after Tyrus Walker made one of his two free throws. Jordan McRae made a jumper and knocked in one of two free throws to force the game into overtime.

In overtime, it was the Damyean Dotson show. The Houston product scored 12 of his 14 points in the extra period to lead the Knicks to victory.

The Positives To Take From This Game

The Knicks played with more defensive intensity in this game than they did throughout half the season last year. It was surprising not hearing the legendary Walt “Clyde” Frazier mentioning them playing matador defensive more than ten times in one game.

Also, it’s possible Fizdale may have found his defensive unit to help close deficits in the regular season. Going into the third, Fizdale put out a starting lineup of Ntilikina, Knox,  Mario Hezonja, Emmanuel Mudiay, and Mitchell Robinson. Together, they played suffocating defense, and the Wizards couldn’t buy a bucket. That lineup took all of the Wizards’ money and left Bradley Beal and crew broke.

Last, but not least, Alonzo Trier may be a problem for opposing teams. The undrafted rookie finished with 13 points, and at times, he seemed unguardable. He has a two-way contract with the Knicks, so it’s possible he may start the season in the G-League. If he keeps up his play, there is no doubt he’ll make the roster.

Overall, based on the first game, the Knicks are going to go through some growing pains. They’ll also be an exciting team to watch this season.

Watch out Knicks fans! There may be some light at the end of the tunnel. For once.

Celtics Bounce Back Behind Kyrie’s 20 Points
It’s Time For Giannis Antetokounmpo To Take Bucks To Next Level
%d bloggers like this: