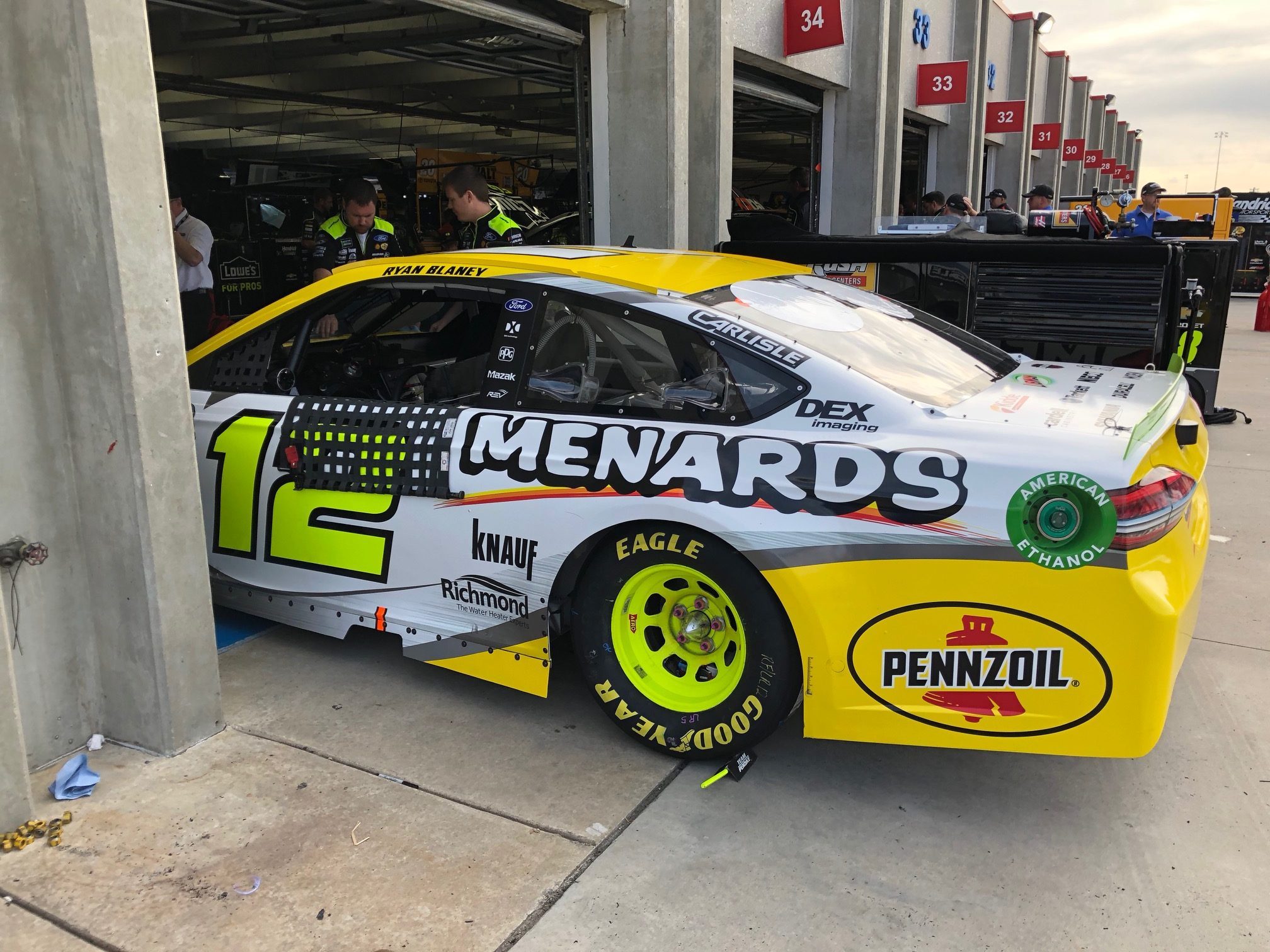 Everybody in the NASCAR world was more than eager to see how the inaugural Roval race would unfold. Adding to the excitement of a new track debuting in the Cup Series was the Playoffs. The Bank of America Roval 400 was the first elimination race in the 2018 Playoffs. This meant that 4 drivers left this race no longer in the title fight. After a crazy last lap, Ryan Blaney emerged as the victor in the first ever road course Playoff race.

This brand new racetrack brought with it a lot of needed attention for the fall Charlotte race. Carolina Panthers Head Coach Ron Rivera said it best “I think [the added publicity] is tremendous. I think the whole idea of being a Roval makes in unique. Because there’s such a fan base for both NASCAR and the Panthers in Charlotte, it’s really cool to drive in and see all of the fans who are here to see this. I think it’s a unique opportunity because it is the first road race ever here. I think a lot of people are interested and want to watch this.”

Calm First Stage at the Roval

The race started out relatively calm on Sunday, with no major incidents on the initial start. Polesitter Kurt Busch was able to maintain the lead through the infield on lap 1. Meanwhile, Kyle Larson went from starting 5th to running 2nd in a few turns. Larson would make his way around Busch for the lead on lap 7. The 42 would eventually work himself up to a lead of over 2 seconds.

The first incident of the day happened on lap 15. The 51 car of Stanton Barrett went straight into the turn 1 wall. This would bring out a caution late in the 25-lap first stage. Some of the front running cars decided to pit under this caution. This strategy call would show how valuable new tires would be on the new course.

On the restart, AJ Allmendinger was flying through the field on new tires. The 47 gained 9 positions in just 1 lap through the infield, which proved how beneficial fresh tires were. Up front, it was all Kyle Larson, as he was clear for the lead by turn 1. Further back in the pack, both Denny Hamlin and Erik Jones had damage from contact with each other. These 2 JGR drivers could not afford any troubles early on. They each had to win this race to advance onward in the Playoffs.

Besides the lap 15 incident, Stage 1 went green until its conclusion on lap 25. Larson was able to cruise to the stage win with a 2 second lead over Kurt Busch.

Playoff Hopes Nearly Dashed for Some in Stage 2

The end result is that Stage 2 did not have a single caution. However, pit strategy made this segment tense for some. Larson restarted as the leader, since he was the only car who did not pit after Stage 1. The 42 was able to keep the lead until making his first pit stop on lap 36. This gave the top spot to Ryan Blaney, with Brad Keselowski chasing him down.

Lap 45 saw William Byron with an issue that nearly turned into a Playoff-affecting catastrophe. The 24 had a tire going down, and was trying to slow down and get to the pits. As he was slowing, Aric Almirola passed him on the outside, and there was contact between the 2 of them. This sent the 10 car into the outside wall with significant damage. However, this incident would not bring out a caution. To make matters worse, the 10 had an uncontrolled tire penalty on their pit stop, costing them valuable track position.

In another bizzare incident late in Stage 2, Brad Keselowski and Martin Truex Jr spun with just 2 laps left. They were racing each other for position in the final chicane when they both got into turn 16 too fast. As a result, the 2 and the 78 looped it, losing some track position but staying damage-free. This incident would serve as foreshadowing for later.

Stage 2 ended on lap 50 with the leaders in a variety of differing pit cycles. Blaney took the stage win, with Jimmie Johnson in 2nd and Kurt Busch right behind him. Both the 48 and the 41 made up lots of track position after pitting when the 42 stayed out.

By racing all the way up to 2nd, Jimmie Johnson was able to gain 9 points in Stage 2. This was a perfect strategy call for team 48. They entered the inaugural Roval race 6 points below the Playoff cut line, and needed to capitalize in the stages.

Stage 3 Starts Off Bad for the 3 team

While racing in a Playoff transfer position early in the final stage, Austin Dillon made some contact with Chris Buescher. This contact sent the 3 into the turn 14 wall, and a few laps later his transmission broke. Dillon was the first Playoff driver to have a race-ending issue at the Roval. Due to finishing 39th, Austin Dillon was eliminated from the Playoffs.

The early laps of the final stage would see many of the leaders choose to aggressively save fuel. At one point, Kyle Larson was chasing down Brad Keselowski for the lead, but was told to back off. Brad had 4 laps less fuel than Larson, so the 42 faded back several seconds. Brad was likely not going to save 4 laps worth of fuel. But as a winner already in this round of the Playoffs, he had nothing to lose.

As strategy was going on up front, the cars with the fastest laps were racing for 20th. Alex Bowman, Clint Bowyer, and Ryan Blaney were all trying to regain track position from a recent pit stop. Bowyer and Bowman were both racing each other for 12th in points. During this time, the gap was down to a single point separating them. The 88, 14, and the 12 were racing each other on-track and in the points. That made this battle for 20th one of the most intense in the race.

With just 9 laps left in the inaugural Roval race, the strategy calls would go out the window. Ricky Stenhouse Jr brought out a caution by hitting the wall in turn 1. Amazingly none of the leaders chose to pit under this caution, since they all believed they saved enough fuel. However, they would be restarting on old tires, which was an unknown factor on the road course. This decision proved very costly, as both leaders Keselowski and Larson had no grip at all in turn 1. They both went straight on into the turn 1 wall in front of the field. 11 other cars were involved  in the pileup. In the 13 car crash were 5 Playoff drivers, including some who now faced elimination.

The new leaders after this major crash were Martin Truex Jr and Jimmie Johnson. With just 3 laps to go, they led the field into turn 1, again on older tires. This time, everyone made it through turn 1 unscathed. The race was now on for the win and for the Playoffs.

While Truex did restart with 3 to go as the leader, Johnson was right on his tail. Johnson was looking to erase a career-longest winless streak of over 50 races. Coming into the front stretch chicane with the checkers in sight, the 48 spun and tagged the 78. Johnson got on the brakes too hard in turn 16. Truex had nowhere to go to avoid getting clipped. Since the top 2 were sideways, 3rd-place Ryan Blaney took the lead with 100 yards to go and won.

After heavy damage from the turn 1 crash, Kyle Larson was facing Playoff elimination. He had to gain a position to advance onto the Round of 12. While Truex and Johnson were spinning, Larson was just exiting the infield in turn 8. Larson was able to tiptoe around the course, and hit the wall twice entering and exiting the final chicane. However, Jeffrey Earnhardt was stalled just shy of the finish line, and Larson edged by him.

By gaining 1 position, Larson finished the inaugural Roval race tied for 12th in points. He was tied with both Almirola and Johnson, with the tiebreaker being the best finish in this Playoff round. The tiebreaker went in favor of Larson and Almirola, advancing them both onto the Round of 12. On the flip side, 7-time champion Jimmie Johnson was eliminated.

Who’s Eliminated After the Roval

Coming into the Charlotte Roval’s inaugural race, both Denny Hamlin and Erik Jones were in must-win situations to advance. Since neither of them won, they both were eliminated from the Playoffs. After his incident, Austin Dillon was 26 points below the cut line at race’s end. Lastly, the late race spin proved very costly for Jimmie Johnson. Because he finished in 8th, he was on the bad side of the tie at the cut line. After a moment of uncertainty, this meant elimination for the 48.

Significance of Being the Inaugural Roval Winner for Blaney

In his victory lane interview, Ryan Blaney said “I didn’t expect that. Sometimes you have to have a bit of luck on your side.” This is Blaney’s 2nd career victory, first of 2018, and first for Team Penske. With the win, Blaney automatically advances onto the Round of 12. As a historian of the sport, winning the inaugural race at the Charlotte Roval wasn’t lost on Blaney. He was beyond humbled and proud of his team for the huge win.

Next week will begin the Round of 12 for the 2018 Monster Energy NASCAR Cup Series Playoffs. The Series will head to Dover, for the Gander Outdoors 400. Coverage will be next Sunday, October 7, at 2:00 PM EST on NBCSN, MRN, and SiruisXM NASCAR Radio Channel 90. Heading to his best track now with no Playoff pressure, can Jimmie Johnson win again? Be sure to tune in on Sunday to find out.

What You Should Know About The Roval
Does Lack of Playoff Pressure Benefit Jimmie Johnson at Dover?
%d bloggers like this: