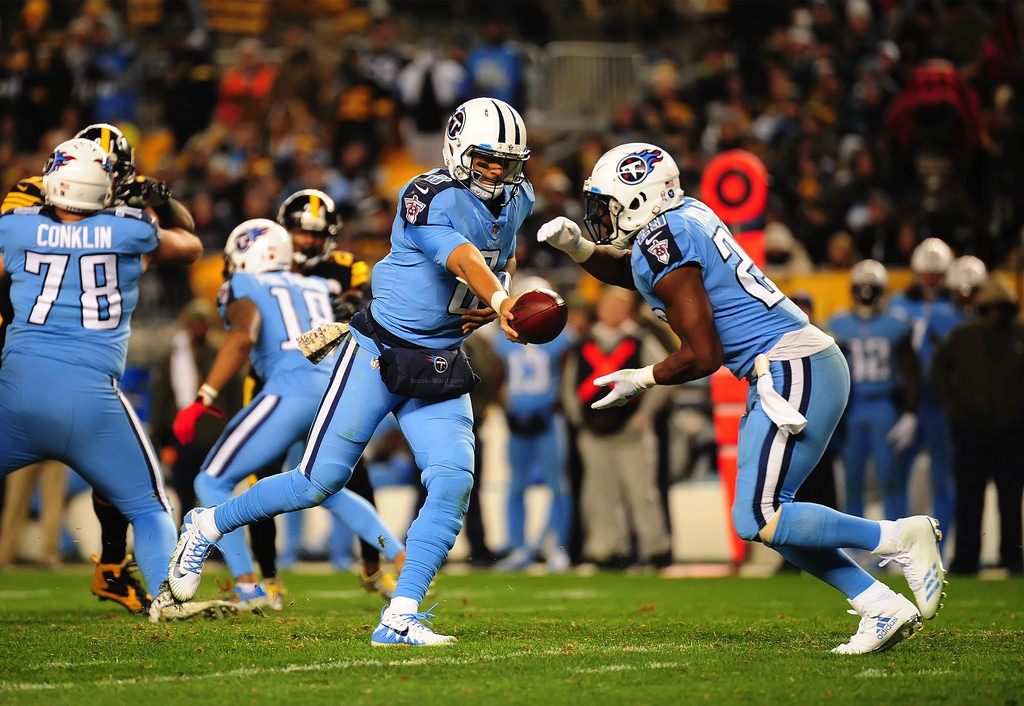 Every season there are a few players that breakout and become recognized as one of the best players in the league. Last season players such as Jalen Ramsey and Carson Wentz broke out in their second year. Other high profile breakouts last year included Todd Gurley who always had the talent and was able to put it together last year.

There are many candidates for players who could break out this year with so many new coaches in the NFL this year. Some of the players that could break out but are not on the list are Mike Williams, Jerick McKinnon, Tarik Cohen, and Corey Davis.

This time last year many people had pegged Marcus Mariota as a breakout candidate. It didn’t happen as he had his worst season in the pros throwing 13 touchdowns and 15 picks. Mariota definitely has the talent as a former number two overall pick. He has struggled with injuries throughout his career.

But this season seems different as new coach Mike Vrabel, and offensive coordinator Matt LaFleur will bring a new offense to the team. The Titans also added a new offensive weapon in versatile running back Dion Lewis. Lewis will create a thunder and lightning duo with the massive Derrick Henry.

The defense also added Malcolm Butler and draft picks Harold Landry and Rashaan Evans. All these additions have given Mariota what he needs to lead this team deep into the playoffs. If everything comes together, Mariota is a dark horse MVP candidate.

The Bengals running back had an up and down rookie year. He rushed for only 626 yards and had 30 catches for 287 yards. Joe Mixon possesses immense talent. He is one of the most skilled pass-catching running backs in the NFL and has one of a kind elusiveness.

The reasons for Mixon’s bad year was sub-par offensive line play and lack of opportunity in a crowded backfield. Both of these problems have been addressed in ways that benefit Mixon. Touchdown vulture Jeremy Hill is now a member of the New England Patriots which leaves only Giovani Bernard as a threat to Mixon’s touches. Bernard is best used as a change of pace option leaving Mixon in a workhorse role.

The Bengals also added to their offensive line which was one of the worst in the NFL last year. They added tackle Corey Glenn and drafted center Billy Price. These players will give Mixon a decent line to run behind and the opportunity to become the next young star.

Christian McCaffery was not a total disappointment as a rookie but his season could have been a lot better. He was very proficient in the passing game which is something that is highly valued in today’s NFL.

Ron Rivera expects McCaffery to get 200+ carries this season. The Panthers outside of Greg Olsen do not have many options at the wide receiver position which means McCaffery will catch plenty of balls.

David Njoku profiles as a physical freak. He runs a 4.64 and stands at 6’4, 246 pounds. The Browns have no option at the tight end position and Njoku has now had a full year to adjust the NFL. Most tight ends have trouble adjusting in their first year, and in year two most tight ends have much better years. With Njoku’s frame, he will be a red zone target for Tyrod Taylor and Baker Mayfield.

Double-digit touchdowns are not out of the realm of possibility. With the addition of Jarvis Landry to the incumbent Josh Gordon, they will draw attention away from Njoku allowing for open looks in the middle of the field. With a good season, Njoku has a chance to vault himself into the top five players at his position.

Kenny Golladay possesses immense physical upside standing at 6’4, 213 pounds. He also ran a 4.50 at the NFL Scouting Combine. While Golladay is buried in the depth chart behind slot threat Golden Tate and Marvin Jones Jr. he has the talent to surpass Jones as the go-to target on the outside.

Detroit does not have a viable tight end at this point which means it is down to those three players for targets. Detroit is also very pass-heavy with Matthew Stafford still playing at an elite level. Golladay would make the Detroit pass offense even scarier.

Former first-round bust Eric Ebron is now a member of the Indianapolis Colts which means there is an opening for a new red zone threat which is a role that Golladay could fill. The Lions still need to solve their problem in the run game but making Golladay into a legitimate threat WR would help their playoff push.

Jalen Ramsey’s Harsh Critiques of NFL Quarterbacks
Aaron Rodgers Makes His Return For the Packers
%d bloggers like this: