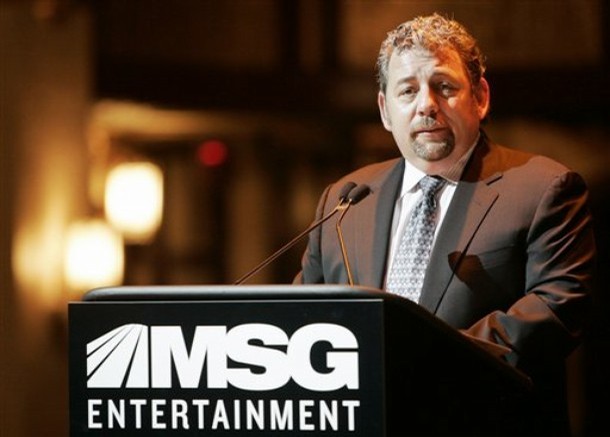 Ever since New York Knicks owner James Dolan inherited the team in 1999 from his father, Charles Dolan, they’ve been mostly bad. The Knicks are currently enduring a five-year playoff drought. They’ve missed the playoffs thirteen of the past nineteen seasons.

The rumors of Dolan selling the Knicks have been out there this summer, which have Knicks fans excited about the possibility of him selling the franchise. He made an appearance on New York Fox affiliate WNYW-TV’s “Good Day New York” to deny the rumors.

“No, we’re not going to sell,” Dolan said. When asked where the rumors started, Dolan simply replied, “Not from me.”

Why Dolan Isn’t Selling The Knicks

The rumors of Dolan selling the team accelerated when he announced he was looking to separate the Knicks and New York Rangers, who he also owns, from the rest of Madison Square Garden. Selling the Knicks wouldn’t benefit him one bit. Some are wondering why he isn’t selling the team?

His reasons to keep the Knicks are simple. Despite the Knicks lack of success since their NBA Finals appearance in 1999, the franchise as a whole is still very valuable. In fact, the Knicks franchise is the NBA’s most valuable one. They’re currently worth $3.6 billion. So that in itself is a huge reason why selling the team would be foolish.

No doubt, Dolan has had great success from a business standpoint as the owner of the Knicks. However, he hasn’t put the franchise in a great position to succeed on the court. During his tenure as owner, he hasn’t had a coach that’s lasted longer than three and a half seasons.

He’s gone through eleven head coaches since Jeff Van Gundy decided to re-sign in 2001. Briefly, the Knicks were starting to turn the corner under head coach Mike Woodson, but Dolan hired Phil Jackson to be the President of Basketball Operations. Jackson let Woodson go and hired Derek Fisher, who never coached a game in the NBA, to be the Knicks head coach.

For Dolan, hiring and letting go of coaches like Woodson aren’t the only mistakes he’s made. In terms of roster moves, one of his biggest mistakes was giving Amar’e Stoudemire a five-year, $100 million deal. Stoudemire was good at times but wasn’t the star the Knicks hoped for due to injuries. He also made a mistake in trading basically the house for Carmelo Anthony.

They parted with Danilo Gallinari, Wilson Chandler, Raymond Felton and Timofey Mozgov, who were actually pretty good for the Knicks before the Anthony trade. They also parted with a 2014 first round pick as well. Gutting the team set the Knicks back and are now in another rebuilding mode because of it.

James Dolan Has An Opportunity To Make Things Right

Dolan has an opportunity to start making things right with the Knicks. They’ve hit home on their draft picks the past couple seasons. With Kristaps Porzingis, Kevin Knox, and Mitchell Robinson on the roster, the rebuild shouldn’t be excruciating.

The Knicks are expected to be big players in free agency next summer. The youth on the roster is good enough for Dolan to stick with. If he can find a way to land Kyrie Irving and possibly another star next summer, the future for the Knicks will be as bright as it’s been in decades.

Jahlil Okafor Getting One More Shot
DeMarcus Cousins: An Unsung Warrior After Pelicans Departure
%d bloggers like this: