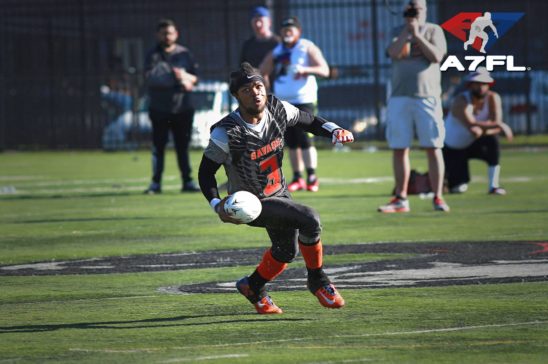 The 2018 A7FL Awards nominations have been announced, as the league is fresh off of crowning new league champions in the Baltimore Gators. This year’s crop of nominees includes last year’s MVP Award winner; wide receiver “King” Matt Riddick II from the Pennsylvania Immortalz.

Defensive Player of the Year Nominees…

The list is dominated by teams from the top five in the North East division; as representatives from the Pennsylvania Immortalz, Baltimore Gators, and New Jersey Savage have been named this year’s picks.

DE Tyler Affa led the Immortalz in a losing effort in the A7FL semi-finals against the Vikings.

Rookie of the Year Award

This year’s nominees wowed fans of the league, and it is no surprise that of the top three rookies in the league, one represents one of the top five teams. WR Kyle Ward represents the New Jersey Savage, and stunned fans and officials alike this season; he has some stiff competition for this year’s honors. RB Dion McDaniel of the Baltimore Army has been nominated; as well as WR KJ Williams of the Pennsylvania Dynasty, who is also nominated for the honor.

The A7FL is slated to open the polls for fans to vote this week, as they will hold voting over on Facebook. Fans can vote on the event page for the poll, which is estimated to go LIVE tomorrow. You can find info at the official A7FL Facebook page and can find out the results through their website, A7FL.com.