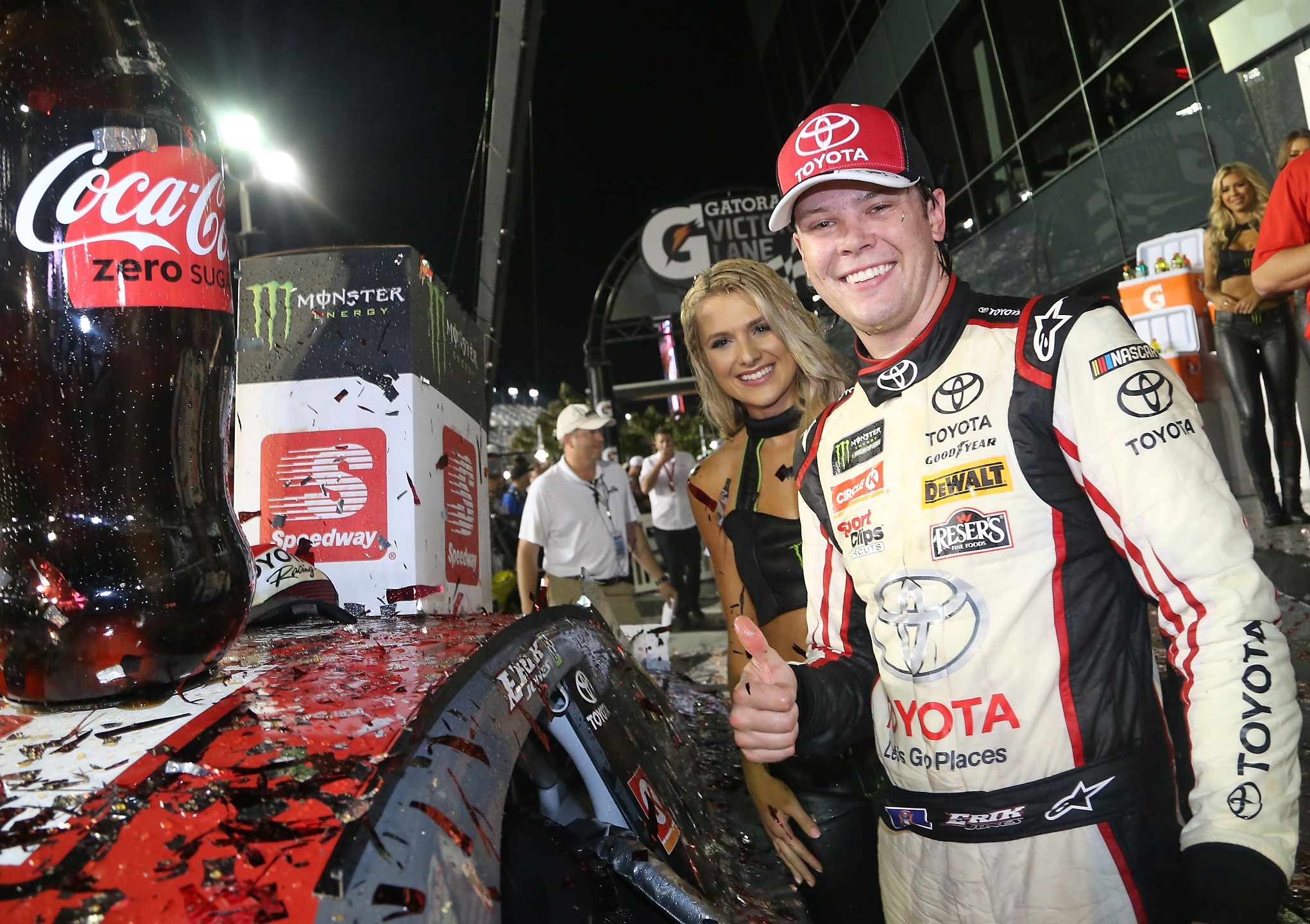 For the halfway point of the 2018 season, the Cup Series made their annual return to Daytona. Daytona is an opportunity race for all drivers. The drafting and the high chances of a big wreck taking out the favorites open the door for potential winners. In a race that saw 16 different leaders and multiple major accidents, the Coke Zero Sugar 400 was one of the most dramatic races all season long. After a very long night the victory went to Erik Jones, career win number 1 for the sophomore driver.

Early Calmness Gives False Sense of Security for Some

Somehow, the entire 40-lap first stage of the Coke Zero Sugar 400 was run without any cautions. During this time, Chase Elliott was leading laps from the pole, as he had some teammates behind him helping. The defending winner of this race, Ricky Stenhouse Jr., would take the top spot 13 laps in. The 17 Roush-Fenway Racing Ford would hold on to win a calm Stage 1. This would be Stenhouse’s first ever Stage Win, as he is trying to gain maximum points to make the Playoffs.

Lap 50 saw a minor accident that brought out the 2nd caution of the night. Coming out of turn 2 in the pack, Paul Menard was turned off the bumper of Jimmie Johnson. Menard would spin to the inside, and even got airborne for a brief second.

Lap 55 saw a major accident that eliminated many prerace favorites, and involved over half the field in total. Racing hard for the lead, rookie William Byron threw a major block on Brad Keselowski. Brad was forced to lift, but Stenhouse Jr. did not. The 17 hooked the 2 in the right rear, turning him up the track ahead of the entire pack. 3rd place Kurt Busch was involved, as were over 20 others. Most notably, this accident ended the night for all 3 Team Penske cars. They were all considered to be favorites for the win, given their history at Daytona.

Leaders Wrecked out in Turn 4

After only 3 more laps of green flag racing, another accident happened at the front of the field, eliminating more strong drivers. In turn 4, Stenhouse was aggressively side drafting Kyle Busch, who was to his outside racing for the lead. The 17 and 18 made contact, which sent the 18 and the 24 car of leader William Byron into the wall. Others involved here included Erik Jones, Trevor Bayne, and Jamie McMurray. After this incident, Stenhouse would hold on to win Stage 2. As a result, Ricky swept the stages in a race he won a year ago. After being responsible for 2 accidents, many were less than pleased with how Stenhouse was racing at Daytona.

The first half of the Coke Zero Sugar 400 saw over half of the field taken out by violent crashes. As a result of this, the race’s final stage started out relatively calm. Drivers chose to just log laps instead of racing hard, for fear of causing more carnage. Michael McDowell would lead 20 laps during this time, the first Cup Series laps he would ever lead. The 34 car was looking very strong, as Front Row Motorsports has a history of upset wins at superspeedways.

Resurgence for 7-Time and Hendrick Motorsports?

Jimmie Johnson would also lead 10 laps during this middle segment of the race. In a wild twist, when the 48 took the lead the crowd roared. The 7-time champion appeared to be in store for a very solid run at Daytona. However, a pit stop penalty would force him to lose a lap. In total, all of Hendrick Motorsports was very strong in the Coke Zero Sugar 400. All 4 of their drivers had great chances to win, but unfortunately it would not happen at Daytona. Could this be a sign of a brighter second half of 2018 for Team Hendrick?

Opportunity for Victory Blown Away for Stenhouse

Lap 125 would see another caution for Kyle Larson losing a tire. When Larson spun, he would collect Ricky Stenhouse Jr., ending his chances at the victory. 25 laps later, Stenhouse would lose a tire himself, bringing out the caution again. Thankfully, nobody else was involved when the 17 spun out.

Perhaps the strongest car remaining late in the race was the 78 of defending champion Martin Truex, Jr. The 78 would make up seconds on the lead pack without any drafting help. He was trying to save his car by running conservatively in a race for survival. Truex would be leading late, as he was looking for his first ever superspeedway win.

With 3 laps remaining in the race, another wreck happened back in the pack. Going into turn 3, the 00 of Joey Gase spun while running 3 wide. He would collect Michael McDowell, Aric Almirola, and Jimmie Johnson. Aric’s impact with the outside wall was so severe, it ripped a wheel off of his car. The wheel went on to bounce down the track in a bizarre turn of events. This would set up overtime for the Coke Zero Sugar 400.

Under the first attempt at Overtime, Truex got a great jump on the restart and would clear as the field approached the white flag. A hundred yards short of the 78 taking the white, another huge wreck brought out another caution. The 14 of Clint Bowyer was hooked into the outside wall by Bubba Wallace. Bowyer was running 5th, and would end the night for Kevin Harvick, Jimmie Johnson, Trevor Bayne, Alex Bowman, and others. This wreck would bring out a brief red flag, which would lead to a 2nd attempt at Overtime.

Closing Laps See Many Drivers Battle for 1st Win of 2018

For the final 2 lap run, Truex would restart as the leader, with Erik Jones to his outside. Kasey Kahne would also be in the mix, as he had led laps earlier on in the night. The 95 of Kahne pushed the 78 clear of Jones by turn 1, but the race was far from over. Heading down the backstretch, Kahne was challenging for the lead and the win. This allowed Chris Buescher to give a huge push to Jones, as he made the pass on the outside of Kahne and Truex. Truex narrowly led over Jones at the white flag, but the outside line behind the 20 was more organized than the inside line. This allowed Erik to clear the 78, and he would block a late charge from Truex to win. This is Erik Jones’ 1st career Cup Series win in only his 57th start.

The top 10 finishers from the Coke Zero Sugar 400 at Daytona is certainly indicative of several wrecks that took out some of the favorites. Behind Jones and Truex were AJ Allmendinger, Kasey Kahne, Chris Buescher, Ty Dillon, Matt Dibenedetto, Ryan Newman, Austin Dillon, and Alex Bowman.

Prior to the win, Jones was ahead of the Playoff cut line based on points. With the win however, Jones launches himself to 6th in the Playoff standings, as only the 7th winner of 2018. Ricky Stenhouse Jr. won both stages and gained 40 points from the Coke Zero Sugar 400. However, he is still on the outside looking in by 19 points. With 7 winners now locked in, only 9 spots remain with 8 races left until the Playoffs start.

The next stop for the Monster Energy NASCAR Cup Series will be Kentucky Speedway, for the Quaker State 400. Racing from The Bluegrass State is sure to be a fight to the finish. The Big 3 are looking to maintain their dominance on 1.5 mile tracks. Race coverage will be Saturday night at 7:30 EST on NBCSN, PRN, and SiriusXM NASCAR Radio Channel 90.