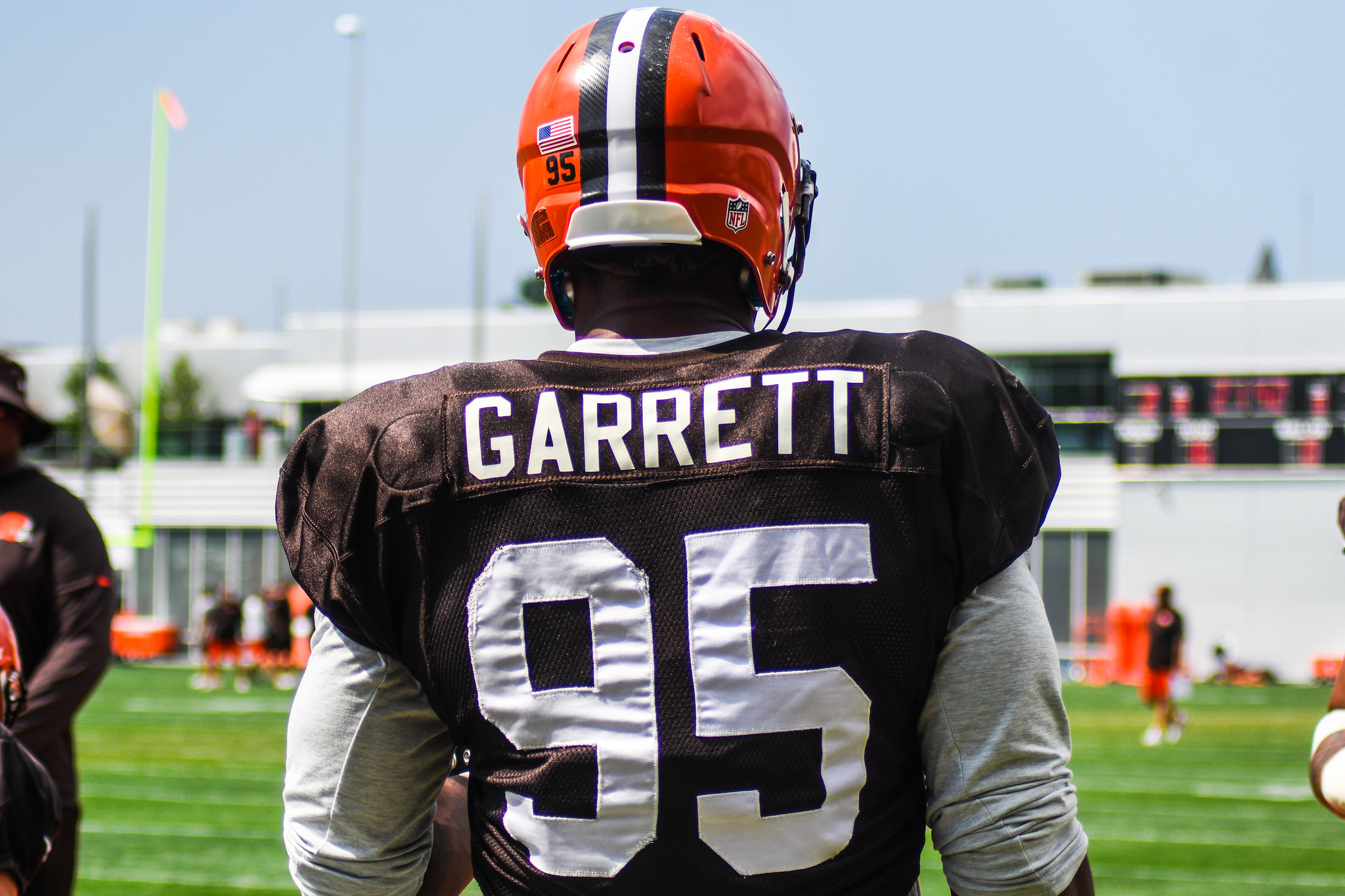 Things aren’t all Champagne and Hennessy for Golden State Warriors Small Forward Kevin Durant. Although KD and the Warriors are celebrating their second title in as many years, not everyone is as cheery.

While Cleveland Cavaliers players and fans continue to show their disdain for Golden State, a new Cleveland athlete has spoken up on Durant’s move to the Bay. During an interview with 92.3 The Fan, Cleveland Browns Defensive End Myles Garrett had some harsh words for the seven-footer. Claiming that KD “broke the league,” Garrett sent basketball fans and Twitter trolls into a frenzy.

But while Garrett’s comments were directed specifically at Kevin Durant and the Warriors, the remarks highlight a major divide between the two sports leagues. While today’s NBA has embraced the “superteam” culture, Roger Goodell’s NFL has prided itself on fostering league-wide parity.

With each league mapping out their own course, it’s time for fans to assess their standing on the issue. Is the top-heavy model of today’s NBA or the balance of today’s NFL better for professional sports?

When asked about the All-NBA Forward’s move to the Warriors, Garrett stated: “He broke the League.“ “[He] hopped onto a 73-9 team and he took the easy way out in my mind,” the former first overall pick continued.

“It’s different when LeBron left. He went to [Miami and joined] Wade and Bosh but it wasn’t something that was already guaranteed, something you already knew was going to have immediate success. [James, Wade, and Bosh] had to gel and work things into place.”

Adding fuel to the flames, Garrett then questioned Durant’s competitiveness. “Me, I’m too competitive to try and ride on somebody’s coattails to get a W. But for him, you might as well stay at the spot you’re at now. There’s no point in leaving since you’ve already taken that moniker where he’s been called the snake and cupcake and all that”.

Myles Garrett … not a fan of Kevin Durant on the Warriors. pic.twitter.com/gUPL7g8AOG

While Garrett may not have meant it, his comments highlight a bigger divide between the NFL and NBA. In today’s NFL, there is a level of parity that doesn’t exist in the Association.

His statements on KD may have been out of turn, but they do bring into question a much deeper issue. Is the parity of the modern NFL better for sports than the lopsided nature of today’s NBA?

In the last two NBA season, there has been a clear narrative pushed by the media that has outlined the inequity that exists in pro basketball.

In 2017, the claim was that no one could beat the stacked Warrior, who added KD to a 73-9 roster in the offseason. The claim wound up coming true, as the Warriors swept each of their Western Conference playoff series. In the Finals, Golden State would only lose one game to the Cavaliers in route to the championship. The Warrior’s 16-1 playoff run showed just how dominant they were.

In 2018, a similar narrative was written. Analysts claimed that only the Warriors and restocked Rockets had a shot at the title. With analysts religiously arguing that the regular season didn’t matter, their narrative ultimately came to fruition. Both teams blew through their respective seasons, finishing as the top two seeds in the west. In the Playoffs, the Rockets and Warriors took each of their series in 4-1 fashion before meeting in the Western Conference Finals.

With the Western Conference Finals proving to be the only major test for either club, Golden State came out on top in seven games. The Warriors proceeded to sweep the Cavs, in the least competitive championship in a decade, to go back-to-back.

The narratives between the NBA and NFL couldn’t be more different over the last two seasons. While the Patriots dynasty loomed large in both seasons, the bigger story was the turnover that came in the playoffs.

In 2018 only four of those teams, the Patriots, Steelers, Chiefs, and Falcons, made the playoffs again. Eight of the twelve playoff seeds drew fresh blood in just a season’s difference. Joining the four returning playoff teams were the Jaguars, Titans, Eagles, Vikings, Rams, Saints, and Panthers.

The NFL’s playoff turnover over the last two seasons (66%) is leaps and bounds ahead of the NBA’s (12.5%). While a limited sample size, the trend doesn’t look to change anytime soon.

This level of turnover and parity is exciting for NFL fans and franchises. While lower-tier NBA teams look to tank for better draft picks in the wake of the Warriors dominance, bad NFL teams are just a good offseason away from contending.

With NFL brass cognizant of how quick the turnaround period is, more teams have become aggressive in the free agent and trade markets. As activity in these markets rise league-wide, upticks in fan excitement and engagement will follow.

Smaller markets in the NFL like Buffalo, New Orleans, and Jacksonville have proven that any team can succeed in today’s NFL. With the talent level so evenly divided among NFL franchises, bounce-back seasons are becoming the new norm.

Unfortunately for Suns fans, they’ll have to wait as their team reloads with lottery picks over the next few drafts.

While the NFL has the woeful Browns, the NBA boasts a legion of perennial losers that will continue to suffer as they slowly rebuild through the draft.

The landscape is much more fruitful in the NFL. Putting aside the outlier Browns, who haven’t had a winning season in a decade, only the Jets and Bears have failed to reach an 8-8 record in the last four seasons.

The Future Of The Two Leagues

As Myles Garrett alluded to, the top-heavy nature of today’s NBA takes away the competitive nature of the game. The NBA regular season no longer matters, so far as major stars stay healthy. While the NFL was able to produce drama week-in and week-out last season, the NBA produced only one series of any consequence in the 2017-2018 campaign.

A dangerous trend for the NBA, today’s “superteam” culture is proving to be cancerous. With only a handful of teams in contention for the title, the NBA has a major problem on its hands.

While the NFL revels over its league-wide parity, the NBA has to look to level the playing field as well.

Check us out on Social Media!

This article was originally written by former TSJ101SPORTS NFL Department Head and writer William Zurcher. Due to systems modalities, the article has been assigned to the author tag designation “Former Writers”.