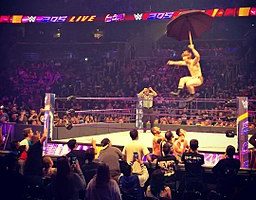 Since the creation of both 205 Live and the WWE United Kingdom divisions, WWE has struggled to establish either brand as must see television. The issue is not a lack of talent as both feature some of the most gifted talents in the business. The issue may lie in the lack of promotion and unique identity of each brand.

On 205 Live we see a collection of former independent stars who have the ability to put on a display of high flying moves that rival anything in the business. Unfortunately, with the influx of premier talent on both Raw and Smackdown Live including Seth Rollins, AJ Styles, Sami Zayn, and Daniel Bryan, stars with larger frames are able to pull off very similar move sets. That creates an issue for the 205 Live roster as it takes away some of their identity. When those stars are not built up as strong, the question becomes, why to tune into 205 Live when I can see that high flying action from a bigger star on Raw?

The original concept for 205 Live was a good one. The issue with its presentation is that after a 2 hour Smackdown Live taping, most fans are simply tired. They have less motivation to stick around for another hour’s worth of programming from lesser established stars. If the presentation was better and the talents given the time to truly showcase their ability then there may be a chance for higher viewership.

Some of the 205 Live talent have had long careers on the independent scene where they developed reputations for delivering amazing matches. Those matches are what convinced WWE to sign them in the first place. Then when they debut on 205 Live, WWE restrains their creativity and prevents them from doing the very things that made them stars in the first place. It is counterproductive.

On paper, this was a great idea. The United Kingdom is home to a variety of untapped talents that have been killing it on cards throughout the region. WWE viewers had limited exposure to the unique style that the European talent is so well versed in. It is a refreshing change from the American wrestling that has been the focal point of WWE programming for years. This division was a great opportunity for WWE to give the fans something fresh.

The United Kingdom Championship Tournament really had the wrestling community buzzing with anticipation. The first time fans in the United States saw talents like Pete Dunne and Tyler Bate, the response was incredible. The prospect of having a new crop of personalities was must see television. Once Tyler Bate was crowned the inaugural champion, the championship was not seen until NXT shows months later. Pete Dunne captured the title at NXT Takeover: Chicago and once again, the championship went on hiatus from WWE programming. Dunne, Bate, and fellow UK stablemate Trent Seven have made a few appearances on NXT shows and Dunne made a one time excursion on an episode of Raw but otherwise, main stream WWE fans have been UK division starved.

There has been renewed conversations about a United Kingdom show in late 2018 and the UK Tournament will make its return in mid June but is this all too little too late? There have been assumptions by many that based on the appearances of UK talent on NXT shows that they may be absorbed into that division. Still other UK talents have shown up on 205 Live. It all creates a lot of confusion about where these two intellectual properties are headed.

WWE has to find a way to showcase all of their stars in a meaningful way. If done properly, WWE can cultivate very different presentations which will draw in a broader audience. There is a need for 205 Live to be given a more interesting presentation. The UK division, despite seemingly being allowed to have a bit more acceptance of their wrestling style versus that of 205 Live, has to evolve into its own entity. Otherwise, WWE should capitalize on the popularity of the small UK sample size and crowd response and merge the two shows.

If WWE was going to be truly innovative, they would look to have completely separate shows and concepts. They would have cross over only a few times per year making the special appearances more of an attraction. Too much mixing of NXT, UK, and 205 Live storylines will water down all three shows. It will take away from the potential of everyone involved.

Wouldn’t it be interesting to see the NXT North American Champion battle the United Kingdom Champion once per year? Can’t you see Mustache Mountain take on Akira Tozawa and Hideo Itami? I wouldn’t be opposed to a Supercard of sorts blending all three divisions just once per year perhaps around WrestleMania time. I would not continue to blur the lines between the brands so that they can’t develop their own identities. That would take away from all three programs.

What are your thoughts about the United Kingdom Division and 205 Live? How would you handle the booking going forward? Put your comments below.