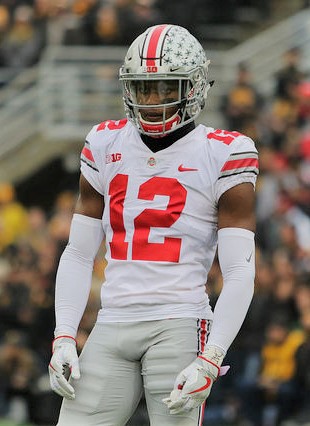 The fact that he didn’t often crack the starting lineup isn’t entirely surprising given the host of NFL talent that he was buried behind on the depth chart. Ohio State had three DBs drafted in the first round of last year’s draft and six defensive backs in the past three drafts. Those backs were Eli Apple, Vonn Bell, Lattimore, Malik Hooker, Gareon Conley and Damon Webb.

Ward’s final game in a Buckeye jersey came in the Big Ten Championship against Nebraska, which the Buckeyes won 27-21. In that game, Ward came up with a big interception in the first quarter to prevent the Badgers from getting on the board first.

Widely regarded as the top cornerback in this year’s draft class, Ward only helped his case with his 40-yard dash time (4.32). Everyone will know why they call him “Flash” Ward — and combine performance.

“Denzel’s got a ton [of swagger],” Coombs said. ” … [Ward] just does his business. He shows up every day, works very hard, prepares himself very well. I’m really proud of him.”

“Then last year, he had a great camp. The first few games they put him in the [cornerback] rotation, he just did what he was supposed to do.”

Ohio State cornerback Denzel Ward throws up "O-H" as he exits to the locker room. Ward was ejected from #OSUvsMD for targeting. pic.twitter.com/uaocsfDnPn